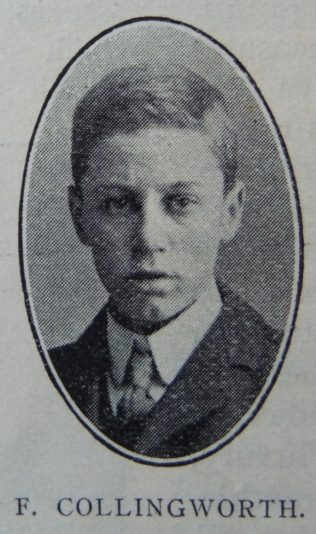 CALLED from our midst in his seventeenth year, comfort is found in the faith of Marget Howe, “God needs my laddie for some grand wark in the other world.” The ideal of our young friend was “ Ich dien.” Oftentimes he seemed to catch the sound of holy voices beckoning him to paths of service. His gentle disposition, affectionate nature, lofty idealism, studious habits, devotional spirit, attachment to Christ, and general popularity, encouraged others to predict a life of great usefulness. He sought to lay foundations. Four years in succession he carried off the first district prize in the Scripture examination, and last year the second Connexional prize in the Upper Middle Division. A day or two before his death, he ‘said to the writer, “I will win the gold medal yet.” How he loved his Bible! It was his daily feast. How he revelled in the hour of family prayer! It was the season of heavenly benedictions, and with its fragrance about him he passed away. How he clung to Christ!
“This I know, my all in all
Has now a place in heaven for me,”
were among the last words he desired his companions to sing for him. Taken home early on Sunday, September 18th, on September 2lst his comrades lovingly carried his body to its resting place, Rev. F.W. Norris and Mr. Bielby officiating.

In the Beeston Hill Sunday school hangs his photo. His name appears upon the School Roll of Honour. His life was brief, but will not soon be forgotten. Memory will often re-paint pictures of a youthful life made strong and beautiful because Christ was its inner spring.

The subject of this obituary was Frank Tyndall Cullingworth. He was born on 15 January 1894 at Hunslet, Yorkshire, to parents John William Cullingworth, a gas meter inspector (1901), and Jane Tyndall.

Frank was baptised on 28 March 1894 at the Wesleyan Chapel, Dewsbury Rd. Leeds, Yorkshire.

Note: The surname on the picture in the messenger is incorrect.