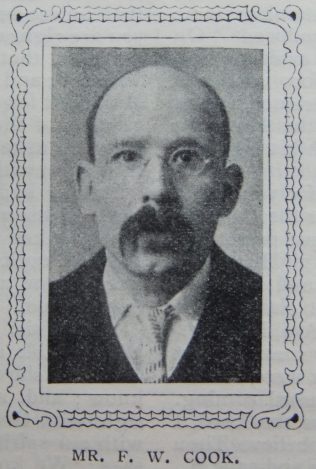 Amongst the company of the Society Stewards of our Church, Mr. F.W. Cook holds a worthy position. There may be those who are more prominent – there are none who perform their duties with greater efficiency. He is a fine example of those who glory in being useful.

For twenty years Mr. Cook has been associated with the Society at St. Peter’s Street, Lowestoft. He was impressed by the intense spirituality manifested at a teacher’s meeting, and at once attached himself to the Church. In the Sunday school he has rendered valuable service as teacher and secretary. Wholehearted-ness and persistence characterise all he takes in hand. As member of the choir, assistant superintendent of the Sunday school, vice-president of the C.E. Society, and Band of Hope president, he is doing good work, and is doing it in such a manner that the man reveals himself superior to any office he holds. He is always busy, but never fussy. He has so much real dignity that he does not need to assert it.

As Society Steward he stands in a worthy succession. For some years he was assistant to Bro. Robt. Woodrow – a veteran who, at 90 years of age, never purposely missed service, and who when present always took up the collection on his side of the church. Bro. Cook succeeded to the chief position two years since, and has proved himself most painstaking and capable. The Quarterly Meeting never has to pause its business to settle his accounts; they are complete and in the hands of the Circuit Steward previously. He is also careful in detail. The C.E. Class, of which he is acting-president, contributes more largely to the Circuit Fund than any other class in the Circuit. He is attentive to strangers in the services.

Frederick was born abt 1868 at Lowestoft, Suffolk, to parents James Newby Cook and Eliza. James was a tailor.

Frederick worked as a cabinet-maker.