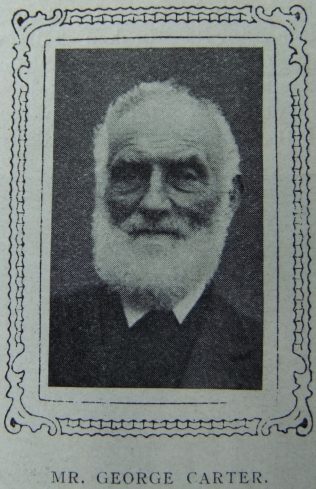 MR. GEORGE CARTER was born at High Littleton, Somerset, January 24th, 1841, blest with godly parents, and thus experiencing the gracious influences of piety, he, however, specially emphasises the fact that he got great spiritual good from the ministrations of the pulpit, and in connection with a service conducted by Mr. William Tovey, of Mid. Norton, he decided for Christ.

Some time afterwards he went to live at Withy Mills, where our Society is the only one in the village, and finding the journey to the High Littleton Wesleyan Chapel, where he had attended and was converted, too far, he gradually got attached to our cause, became a member, efficient superintendent of the Sunday school, successfully taught the Bible Class, as well as for years being Society steward.

In the home of Mr. Carter our preachers have always found a genial welcome and unbounded hospitality. Mr. Carter, during his term of office as steward has done splendid work, helping very largely to sustain the cause of Christ in the village. His work has always been wholehearted. He has been most regular in attendance at the means of grace, and a liberal supporter of the various funds. Behind all however, he did and gave, there was his sanctified personal influence operating to bring others to Christ. His Christian life has been characterised by a simple faith in Christ and a quiet walk with God. Although on account of deafness, he cannot take the practical part as in the past, yet he retains the post of honorary steward, with the unanimous consent of his brethren, and is delighted any sign of prosperity in the Society and Circuit. May he and his dear wife be spared to us for many years yet, and at the close, hear the Masters “ Well done.”

George was the son of George and Sarah Carter. George, senior, was a coal miner.

Census returns up to and including 1881 record George as a coal miner. Thereafter he is described as a farmer.