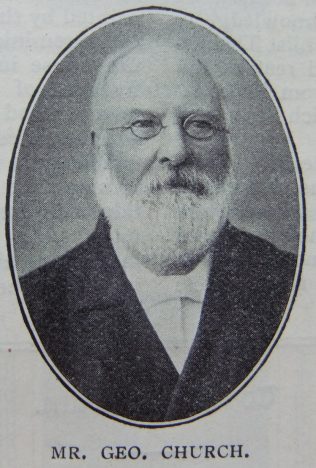 Few men have greater claim to rank among the “Veterans of our Lay Ministry” than Mr. Geo. Church of West Bromwich, 1st Circuit, now advanced in years, having recently celebrated his Diamond Jubilee, yet his eye has not lost its lustre, and his faculties show no sign of decline. Except for grey hairs and measured step, Mr. Church would pass for a man of the morning, rather than one to who, a second spring will not come. He is a living example of the truth that service for God does not hasten old age, but rather glorifies it, by weaving around it a mystic dignity and strength. How far some of our aged brethren can prove the literal interpretation of a New Testament passage, it may be well to ascertain, “He… shall also quicken your mortal bodies by His Spirit that dwelleth in you.”

Mr. Church was converted when about twenty years of age. Three months afterwards, he began preaching at Northampton, in which Circuit the Rev. John Fuller was minister. Shortly afterwards, he came to reside in this Circuit. Most of his life has been spent at Greet’s Green, in which church he was a commanding and inspiring personality. He is a trustee of the commodious premises, for twenty years served faithfully as treasurer, and stood in the fore rank of the church in all its many and varied developments.

Leaving Greet’s Green, Mr. Church became identified with Queen Street society, to which he is now devoted. He finds the means of grace immensely helpful, and the class meeting he attends with commendable regularity. In all the services of the Church, he evidences his gift of listening. The most nervous speaker catches from Mr. Church great inspiration. He is a member of the pew who helps the pulpit; not by audible demonstrations, but by the gift of listening. This may largely account for Mr. Church’s gift of speech. If it may not be asserted that good listeners are good speakers, it may be affirmed that good speakers are good listeners. In conversation, it is a treat to listen to Mr. Church. If dignity must be given to a social function, then no services can be more wisely requisitioned than the services of Mr. Church. The King’s English he knows and speaks in choicest word.

The Circuit called him twenty-five years ago to be its steward, which office he has adorned to this day. He has the reputation of being in all crises, however grave, a minister’s friend. In days gone by, when conflicts were more pronounced than now, he has shown his loyalty in many ways to the men on whose shoulders responsibility rested. He has made an ideal steward, and to this day is held in high esteem. Six times he has represented his Circuit in the District Meeting, and to him has fallen the high honour of representing the District in Conferences held at Hull, Scarborough and Bradford. In the Black Country he is well known, and his name is written in the hearts of the people.

To show its appreciation, the Circuit recently presented Mr. Church with an illuminated address, beautifully framed and richly executed in art – a picture of beauty, in which the confidence and the love of the brethren were expressed in choicest phrase. The meeting at which the testimonial was made was well attended. And many spoke in unqualified terms of the patience, energy and devotion which have characterised their steward for so many years. It was a meeting long to be remembered, and carried with it the conviction that service rendered for God and humanity should not be allowed to pass unrecognised. How many earnest toilers in the field of Christian service could be cheered by kindly word and tender consideration? God alone can tell! Better for the toilers to know how much we love them, ere evening shadows fall and life’s day’s work is done.

As a local preacher of fifty years’ standing, Mr. Church has taken a front rank position. As a “special preacher,” he has been in great demand; preaching is not only for our own people, but called to supply the pulpits of several congregational churches in the district. In the days when Circuits were wide and journeys long, with limited riding facilities, Mr. Church has plodded far to preach the Word of God. At camp-meetings in the open field, and beneath the shade of high buildings in populous towns, his voice has been heard distinct and clear proclaiming the truths of Heaven. The wayside chapel, away from the haunts of men, has been refreshed by his ministrations, as, too, the church of town in which eager crowds have gathered.

Two things have made our friend famous among his brethren: (1) Integrity of character, there is a sterling ring about him, a wholesome atmosphere. To stoop to meanness, either by suggestion or in a direct manner, is to him impossible. Upright in build, massive in body and mind, his actions throughout have harmonised with his physical and mental make-up. A lover of peace, yet quick to reprove; a hater of wrong, a lover of right.

(2) His familiarity with literature has been a great help to him. Few men can quote the standard writers with more ease and assurance than Mr. Church. He has been a great reader, and in many instances given himself up to the study of text-books, theological and scientific. In the realm of fiction he has more than dipped. He has a wide knowledge of Sir Walter Scott and Dickens, whilst Thackeray and Collins he has read and read again. It is a treat to hear him cite from his capricious memory the characters which Scott and Dickens so realistically portray.

Mr. Church’s family is scattered. They have sought and found positions of trust in various parts of the country. It is a pleasure to see them return, eager to see their honoured sire and deeply affectionate mother. Our friend stands in the midst of the family circle a tower of strength, a fountain of inspiration. His sons, now vigorous men who have seen much of life, hang upon his lips and listen to his gentle word of guidance. Tears are shed, as only a father can shed tears, when the time for separation comes, and they go out into the night with throbbing heart and nerves strung high, as “Good-bye” is spoken and the tender benediction falls.

The sun is setting. Inevitable old age is silently creeping o’er our friend. Trouble has written marks upon his high forehead and care has creased his cheek. The winters have come and gone, leaving behind their own deposit. Affliction’s hand has struck deep into the centre of life; but nothing has robbed our friend of his winsome smile, which is, to all who have eyes to see, a benediction sweet. Heart weakness prevents Mr. Church from engaging in pulpit ministrations he so much loves, and in which his life has been spent. He has served well his age, and won a well-earned retirement from strenuous toil, which we pray may be long protracted. He rejoices in the memory of past days, which return clothed in colours vivid, as though painted by the brush of yesterday. His mind full of reminicences of an earlier age is a treasure house into which his best friends have freedom of access. Blessed with a good memory and a good vocabulary, our friend can entertain his friends for many hours in a way which gilds the moments as they glide. For him and his devoted wife, we pray that eventide may long remain before it deepens into night: and when the night cometh a Light may shine above – even the abiding presence of the Father.

George was born in 1838 at Northampton, Northamptonshire, to parents William and Jane. William was a shoemaker.

George followed his father as a boot and shoemaker.

George married Elizabeth Dingle (abt 1842-1917) in the spring of 1857 at Northampton. Census returns identify ten of fifteen children.