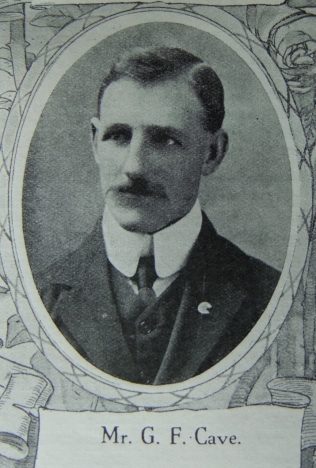 Mr. George Cave, Steward of Micheldever Circuit, is the product of village Methodism. His genial nature, couple with great ability, has made him deservedly popular throughout the Circuit. Still quite a young man, he unites with the ambitions of youth the business ability of mature years. As a preacher he is much sought after, his manly Christianity being remarkably attractive to all who know him. In his own village society he works with vigour. The Sunday School finds in him a capable and hard-working secretary. His influence grows, for all recognise that his very heart is given to the Church he so much loves. The future is bound to open out for him even larger spheres of usefulness, for which we believe he will prove himself worthy. The Circuit is proud of its Steward and prays that he may be long spared to work in the position for which he is so suited.

George was born on 12 October 1879 at Southampton, Hampshire, to parents John William and Rosa. John was a bootmaker.

George worked as an insurance agent for the Prudential Assurance Co (1911). In WW1, George served as a private in the Hamshire Regiment.

George married Maria May Evans (1877-1950) in the summer of 1903 in the Stockbridge Registration District, Hampshire. Census returns identify two children.