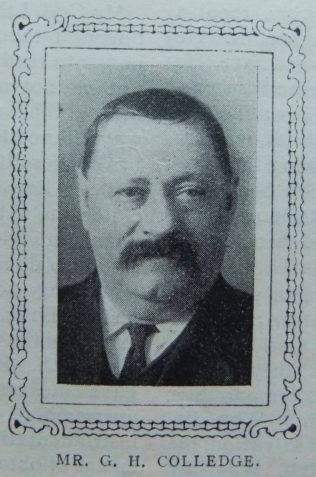 MR. G.H. COLLEDGE was born at St. Georges, Wrockwardine Wood Circuit, fifty-four years ago. This station was among the oldest of those originally comprising the Tunstall District. The first chapel here was built in 1822, and the Inscription Stone of it was given a place in the side wall of the present edifice. The neighbourhood has been the scene of many powerful revivals, in which hundreds of precious souls have been converted to God; and from generation to generation our Church has been favoured with the labours and prayers of men and women who were Primitives of the old type, many of whom attained unto a ripe old age. Into line with such as these it has been the privilege of our brother to come.

Blessed with a godly mother, he had often been deeply impressed by her pious example, earnest entreaties and fervent supplications, but not until he was over twenty years of age did he fully yield himself to Christ, which happy event took place one evening after listening to a sermon preached by the late Jephtha Brown. He joined at once the Society at Nabb, and after a short time the Quarter-day gave him a Note to accompany the late James Wood to his appointments. His progress was gratifying, and he was in due course raised to the position of a fully accredited preacher. In this capacity he is earnest and acceptable, and under his toils souls have been won who will be his crown of rejoicing in the day of the Lord Jesus.

He has, for many years, also honourably filled the post of Society steward, formerly at Nabb, and then at Wrockwardine Wood, whither he came some years since to reside. His wife is a true helpmeet, both at home and in the Church, and we trust there are for them many more years of happy, successful service.

George was born in 1858 at St. Georges, nr Shifnal, Shropshire, to parents George Henry and Ann. George, senior, was an engine driver in a iron works (1891).

George married Emma Jones (abt1859-1930), a widow, in late 1892 in the Wellington Registration District, Shropshire.