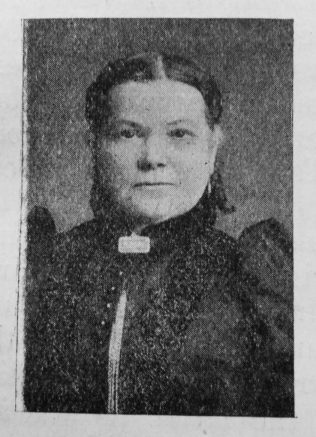 Mrs. Cook, wife of Rev. George Cook, of Lancaster, was born at Shrewsbury. Deprived in very early life of her parents the bereavement made a deep impression upon her which led to her full decision for Christ. On the occasion of her first marriage she became a member in our Castle Court Society, Shrewsbury, where, with her husband, she took a practical interest in the prosperity of the church. Her husband’s death left her in charge of a small family and an important business.

On her marriage with Rev. George Cook, the business, of course, was relinquished. In all their circuits Mrs. Cook’s high character and usefulness won the esteem and affection of the people. Some twenty-six years ago, through living in a damp house, she contracted acute rheumatism and became practically an invalid, with increased suffering year by year; but through all these years she was cheerful and patient, always taking the deepest interest in Christian work to the utmost of her power.

Two months before her death an attack of influenza enfeebled her much, and affected the action of her heart, and on the morning of May 8th, 1906, at five o’clock, watched by her husband, son, and daughter, and several dear friends, she passed away to her eternal rest. The funeral service was conducted by Revs. T. Whitehead and E. Hancox, assisted by Revs. R. Smith, C.W. Turner, G.G. Martindale, J.S. White, and W. Tunley; two of Mrs. Cook’s favourite hymns, “There is a fountain filled with blood,” and “Rock of Ages,” being sung at the grave.

Our dear sister was marked by great conscientiousness, simplicity, generosity, and abounding faith in God. She was sturdy, independent, straightforward, and fearless in doing right. She was a generous supporter of our Church and institutions, to many of which she regularly subscribed without being solicited. She practised systematic and proportionate giving. Unable to attend the means of grace, she forwarded her offering every Sabbath, and made up for absence from home on her return. She had marvellous powers of intuition, for perceiving the truth of things, and was rarely, if ever, at fault. Her judgment of men and things could always be relied on.

Rev. E. Hancox writes: “She had a fine intellect and a tender soul. How generous she was. The poor had in her a true friend. How she studied her Bible and the best biographies.”

Rev. F. Jeffs says: “She was amongst our truest-hearted excellent women.”

Rev. J. Flanagan writes: “Blessed art thou to have had thy life so beautifully enriched by such a sweet soul’s fellowship and love.”

Rev. B. Beckerlegge writes: “I have always thought of Mrs. Cook with feelings of esteem and affection. Your coming to Aldershot brought me sunshine and fellowship.”

Our dear sister has not lived in vain, she, “being dead, yet speaketh.” To the bereaved husband and family we tender our deepest sympathy, and pray that they may be divinely sustained, so that in the by-and-by they may have a happy re-union in the Fatherland.

I have not been able to identify Harriet’s parents in on-line records.