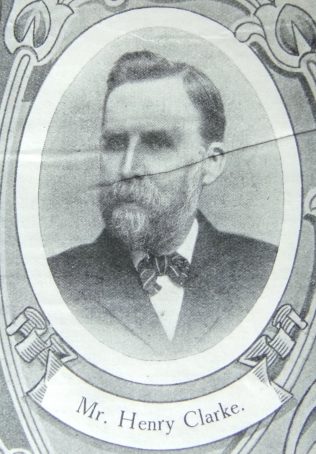 The Steward of Nottingham V. Station has been a member of our Church 58 years; having joined our Society in Loughbro’ in 1850. He left Loughbro’ for Leicester when 19 years of age, and became a member of our Curzon Street Society. His devotion and intelligence marked him for speedy promotion; and very soon the S.S. authorities made him the Junior Superintendent.

In 1889 he removed to Nottingham, and soon was at the head of Blue Bell Hill Sunday School, of which establishment he is the Senior Superintendent.

When Nottingham V. Circuit was made, 15 years ago, he was unanimously chosen as its “Chancellor,” and right worthily he has filled the duties thereof. He is a liberal supporter of all Connexional funds.

He loves our Zion; leads in the Sunday evening prayer meetings; has been delegate to several District meetings and Conferences. He is a good man. May he be long spared to our Church and city life.

Henry was born abt 1840 at Normanton on Soar, Nottinghamshire.

Census returns and the location of children’s births identify that after living in Leicester from circa 1859, he returned to Loughborough during the period 1870-1880, and removed to Leicester again before finally moving to Nottingham in 1889.

Henry was involved in the manufacture of hosiery.

Henry died in the spring of 1917 at Nottingham, Nottinghamshire.