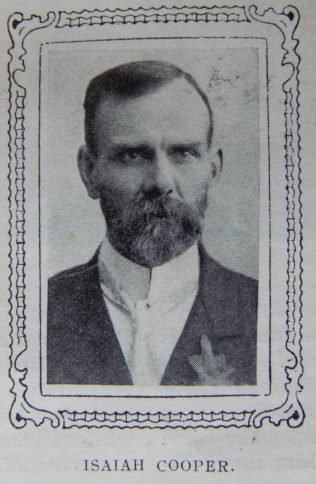 The name of the subject of our sketch suggests at once that his parents must have had a fair knowledge of the old Book, because, famous as is the Prophet even today, few parents adopt the name for their children. Mr. Cooper’s parents were such as suggested. His father was a local preacher for over forty years, and belonged to Wymondham Circuit in Norfolk, and; with Robert Key and others, travelled many hundreds of miles to preach the gospel in these Norfolk villages.

In the later years of his life Mr. Cooper removed to Shoreham which would be visited from the Brighton Mission. Here our subject was born and was taken off to the chapel when a mere child, where, while but a youth, he gave himself to the Saviour. As in these days converts were soon put to work, young Cooper began work in the school, and became a member of the choir, and for a number of years laboured hard in that way. He also took an active part in inviting others while distributing tracts, and when the new church was to be erected he was no mean worker and adviser. Many years ago he came to reside in Gillingham, Kent, found our people struggling in a small iron building with a feeble cause, but rather than do as many have done, seek a bigger building, he stayed to work. Mr. Isaiah Cooper has been our Society steward for a number of years; he is also a trustee. Mr. Cooper is one of those quiet workers, but in one way his work tells, for he is training his family to honour his own church and people; in this he has succeeded. We pray he may live to honour his Father’s Church and people.

Isaiah worked as a tailor.