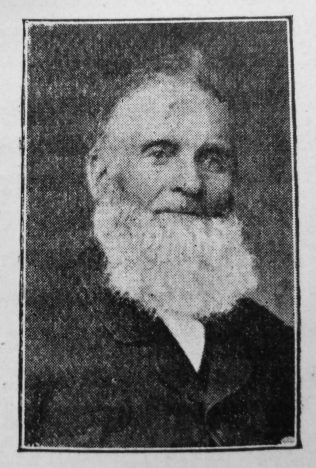 Transcription of Obituary in the Primitive Methodist Magazine by T.R. (Thomas Richards)

The Old Hill Circuit have lost, by the death of Mr. James Chapman, a tried and noble friend. His death took place at Clent in August, 1904. Brother Chapman was born in the year 1823 at Poulton near Bath. His parents were active members of the Church of England. His mother died during the terrible cholera epidemic when James was nine years of age. He often used to speak of this terrible scourge and of the sweeping desolation caused thereby, and of seeing as many as thirty persons buried in one grave.

He commenced to work at the early age of seven years, and when he was fourteen years he left home and came to reside in Dudley, where he began to attend services in our old George Street Chapel.

And when about twenty years of age he was brought to God by the preaching of the Rev. William Rooke.

Brother Chapman was twice married; by his first marriage he had two sons and one daughter. By the second marriage he had nine sons and two daughters. Eight sons and two daughters survive him. Mrs. Chapman, who still survives him, was a teacher in the school and a member in the choir at the time of their marriage. She was indeed a true helpmeet to him, and they were a mutual blessing to each other. After his conversion he took great interest in the school and taught the younger children. As a miner at this time he had to work long hours, yet he seldom was away from his class, or any other service such as band meetings, cottage prayer meetings and preaching services.

Soon after he joined the Church he was appointed chapel-keeper, which position he held for fourteen years.

He removed from Dudley to Brierley Hill and afterwards to Old Hill. The first Sunday he came here was the first anniversary of the Tabernacle; the Rev. William Wright was the minister. He was a member at Old Hill for thirty-four years till his death. In this Church he exercised a great influence, and was its steward for twenty-three years. He was much respected in the station and was its steward for thirteen years. He also represented it in the District Committee for thirty years and several times as its delegate to the District Meeting; and the district, showed its respect for him by electing him as its delegate to the Conference.

His total years of membership were sixty-one. His happiest hours were spent in the Society class meeting and in the various other means of grace of which he was a most regular attendant both on the week days as well as the Sabbath.

Some years ago he had a bad attack of bronchitis, the bad effect of which never left him, and for the last three years of his life at times was very distressing. He went to reside at Clent, where it was hoped with the advantage of pure air he would recover, but this hope was not to be realised. A few weeks before his death his disease was very acute. He knew his end was near for he committed himself wholly to Jesus Christ his Saviour. He often fancied he saw beautiful light and old comrades who had gone before. They came to him, he would talk to them, and he would often say, “All right. Wait a bit. I’ll come.” When the end came it was indeed peace.

Our departed brother was a man of vigour and energy both in business and in the Church, whatever he did it was done with his might. As a father he took great interest in the well-being of his family and at one time was seen to rejoice that nearly all were members of the Church. He was a man with a warm heart, a true friend, and his hand was open to the needy and to the institutions of the Church.

I never knew him asked to assist any needy cause but he most readily responded. His heart was in the well-being and success of our Church. No effort or sacrifice would he spare for its good, and he has left behind him the memory of his love and devoted service.

James was baptised on 25 May 1823 at Poulton. His parents were William, a collier, and Ann.