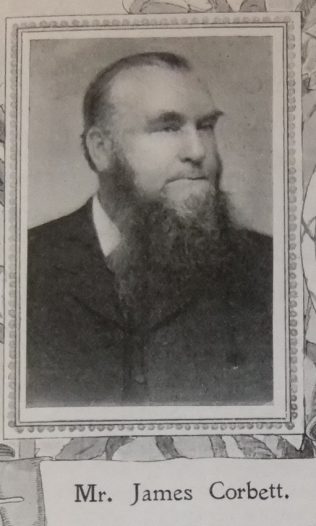 Mr James Corbett, Steward of Nantwich and Burland Circuit, is some sixty-three years of age and son-in-law of the late Venerable Thomas Bateman. Of fine physique and splendid temper, pious and devoted to the interests of the circuit, he is a model Circuit Steward. He is constant in his attendance at the Sabbath services and at other services when opportunity offers. He retains quite a youthful spirit and is deeply interested in the welfare of the young life of the Church. He has been an acceptable local preacher and a class leader at Burland Chapel where he has attended for upwards of forty years. A generous supporter of the cause he puts his soul into everything he undertakes. He has held the office of Circuit Steward for about twenty years, diligently attending to its duties which are discharged with credit to himself and honour to the church and circuit.

James was born in 1841 to parents Samuel and Sarah. Samuel was a farmer. James was baptised on 31 January 1841 at Action, Cheshire.

James was a farmer of 104 acres at Henhull Lane, Hurleston, Cheshire, later known as Bridge Farm.