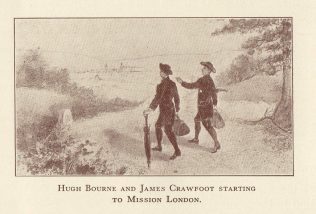 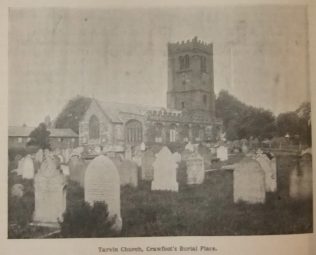 James Crawfoot had a a major influence on the early years of the Primitive Methodist Movement.

As you read his story, you will find that he provided the continuity bridge from John Wesley to Hugh Bourne and William Clowes. He described himself as a Primitive Methodist, the name that was eventually given to the new movement. James was a major influence in developing both the spirituality and methodology of Bourne and Clowes. He became the first paid ‘Home Missionary’ of the Primitive Methodist movement.

James was born in 1758 at Stapleford, nr Tarvin, Cheshire. James Crawfoot was baptised at Tarvin, Cheshire on 1 Jul 1759, his parents being Thomas and Ann Crofoot. (His surname is variously spelt Crofoot, Crowfoot and Crawfoot.) His parents were Anglican adherents.

He married Phebe Billington on 27 August 1780 at Tarvin.

James was about six feet tall. He was described as having a long visage, a high forehead, and his eyes beamed with kindness, affability and mildness. He had a vivid imagination and was very perceptive.

James had a conversion experience in the early hours of 7 January 1783. He immediately united himself with the ‘despised’ Methodists of the Chester circuit. He became a local preacher.

James went to Chester to hear John Wesley preach whenever Wesley was at Chester, including the last time that Wesley visited in 1790. He recalled Wesley’s last words to the ministers and local preachers in the area after that service. “Fellow labourers, wherever there is an open door enter it and preach the Gospel: if it be two or three under a hedge or a tree – preach the Gospel.”

This earnest exhortation stimulated James to greater activity in the service of the Master.

Circa 1793, James moved from Duddon to Brinn, onto a sequestered plot of cleared land, which he had leased in the forest glades of Delamere. Through his influence, a Methodist society was formed and a chapel erected at Brinn. This was known as the ‘Forest Chapel” and was part of the Northwich circuit.

James began a monthly service on a Saturday evening at his home for the promotion of spiritual life. The attendees became known as the ‘Forest Methodists’. It was a common occurrence, that in the midst of these services, for persons to pass into a state of trance and have visions. Such behavior drew attention and controversy. The frequenters of these services became widely known as “Magic Methodists”.

Hugh Bourne and William Clowes first visited James Crawfoot in June 1807 and were heavily influenced by his style and teachings. Crawfoot’s house in the forest became the college for the Bourne brothers and William Clowes, where they were taught ‘the mystery and importance of faith, of the method of opening heaven, and bringing down an influence that caused believers to thirst for more purity in their hearts and sinners to grieve for their sins, of the necessity for watchfulness and the constant exercise of faith.’

Expelled from the Wesleyan Church

In 1807 Crawfoot experienced several difficulties in his life. In November of that year his wife Phebe died, aged 48. In December the Northwich Circuit Quarterley Meeting charged James with ‘irregularities’ because he had preached for the Quaker Methodists at Warrington.

In his defense Crawfoot reminded the meeting of Wesley’s words 17 years previously. He declared; ‘If you have deviated from the old usages, I have not. I still remain a Primitive Methodist.’

The case was adjourned but at a subsequent Quarterley Meeting, James was deleted from the plan because of his labours outside the Methodist Church.

James was appointed the first paid travelling preacher by Hugh Bourne and his brother, James, in November 1809. He was given 10s per week in order to carry out evangelistic work in Cheshire, Lancashire and Staffordshire on either side of Mow Cop. It was further decided that Crawfoot should advise new converts to join the church of their own preference. Their design was to make Christians and not denominationalists.

In 1810, James visited London with Hugh Bourne. During this memorable visit, Crawfoot, by his strong faith, healed a crippled woman who had been run over by a cab, and who had been dismissed from a London Hospital as an incurable. Bourne spoke of it as an astonishing miracle.

Kendall writes that “though he had gifts of no ordinary kind, they were not of the camp meeting order, and hence he seldom took part in such services”. He is described as a rustic mystic. Whereas many mystics had a tendency to be inward focused, Crawfoot promoted an outward altruism within the context of visions and mysticism.

Sadly there was a falling out between Hugh Bourne and James Crawfoot and Kendall reports that in 1813 Crawfoot left the Primitives.

Three reasons have been given for James leaving the Primitive Methodist itinerant work.

Firstly a rift arose between James and Hugh Bourne following James marriage to Hannah Mountfoot. Hannah Mountford had been a long time servant of Mrs James Bourne, to whom Hugh Bourne had himself proposed at a class meeting. Due to the peculiarity of the circumstances of the proposal, Hannah had refused Bourne.

Secondly, Hannah apparently became ill shortly after the marriage, causing James to miss a number of preaching appointments. That is possibly the basis for the disciplinary proceedings being initiated against James. (Note: Parish records indicate the marriage took place on 3 Jan 1816)

Thirdly, James forte was evangelism and not Church government. When Bourne and others formed a circuit and began to administer Church governance, James could not be submissive to those who had been his disciples and whom he had instructed of the Gospel. Petty subscribes to this reason as the cause of James leaving the Primitive Methodists.

In May 1814, the homestead at Brinn burned down. Homeless, James sold the remainder of the lease on the little farm for £100. He lost the money to someone professing Christianity and offered him lodgings. The villain escaped to America.

Soon after James moved to Duddon, where he was aided by his son.

James died suddenly on 23 January 1839 and is buried in Tarvin Churchyard, Cheshire.