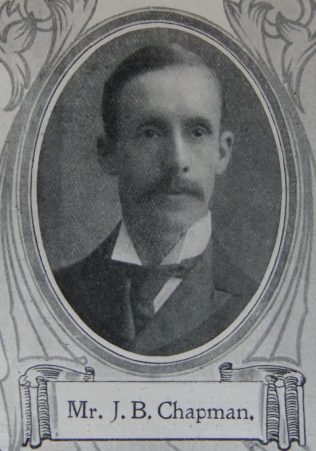 The Hull Fifth Circuit is highly favoured in its chief Steward. Intelligent, accurate, liberal, enthusiastic – actuated by the highest motives – Mr Chapman discharges his duties as one who has pleasure in doing his best; a most loyal Primitive Methodist from his earliest days, and an active member of the Church for the past twenty-five years. The Christian Endeavour at Bourne is among the best – and this is largely due to the wise leadership of Mr Chapman, who has been its president from its commencement in 1898. While serving our cause in many ways his main work has been among young people – many of whom will long remember him for his care and kindness while under him as superintendent and teacher in the Sunday School. He has been honoured this year by his election to the Presidency of the Hull and District C.E. Union. He is an assistant Solicitor to the Hull Corporation, and Secretary to the Governors of Hymer’s College.

John was born in 1865 at Bempton, nr Bridlington, Yorkshire, to parents John and Hannah. John, senior, was a railway signalman. John was baptised on 25 August 1865 at Bempton.

The family had moved to Hull by the time of the 1871 census. John commenced work as a telegraph clerk with the North Eastern Railway Company (1881). The 1901 census describes John as an article and solicitor’s clerk. In 1911 he is a solicitor and deputy town clerk. The family moved to Burton on Trent before 1917.

John died on 10 October 1930 at Burton on Trent, Staffordshire.