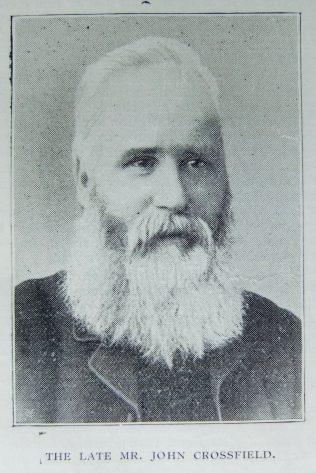 THOUGH the memoir of Mr. John Crossfield will appear fully in the ‘Aldersgate’ in due course of time, we are pleased to be able to give a photograph and brief notice of our esteemed brother in Christ in the Messenger.

Mr. John Crossfield was well known to every one who resides in Otley or the district, for since 1860 until the day of his death, which sad event occurred on February 7th, 1901, Mr. Crossfield has worked incessantly for the good of that town and the Church with which he was connected. His principal work was in the Sunday school. Here he most efficiently discharged the duties of secretary for eleven years, Assistant Superintendent for twelve years, and Senior Superintendent for another twelve years.

He was also for 27 years leader of a society class at Otley. To this work he also gave much attention in visiting the sick and others as far as time at his disposal would allow. His knowledge of the ways of the world, his sympathetic nature, his thoughtfulness and wisdom all helped to make him one of the best of leaders.

Mr. Crossfield took a great interest in the Missionary work of the Connexion. He was vice-President of the Metropolitan Tabernacle Missionary Meeting for 1898. The Rev. A. Baldwin, of Mashukulumbweland, was one of his scholars in the Sunday school.

Recognising his worth his fellow-townsmen elected him a member of the School Board Council, Board of Guardians, and the ‘Otley Charities.’ In all these spheres he carried his religious convictions and without any ostentation endeavoured to serve the people.

John was baptised at Armley, Leeds, Yorkshire, on 22 March 1835. His parents were Timothy, a clothier, and Ann.

His probate record describes him as a printer’s engineer.