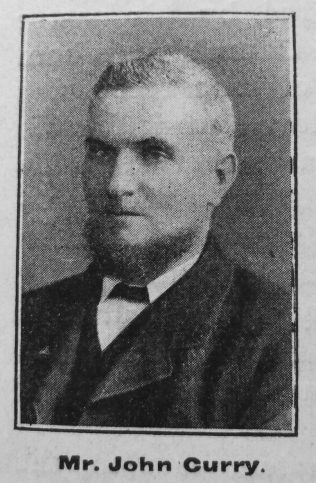 Transcription of Obituary in the Primitive Methodist Magazine by J.T.

The Houghton-le-Spring Circuit sustained a severe loss by the death of John Curry, the senior Circuit Steward, which took place on Thursday, September 17th, 1903, at the age of 63 years. He had been ailing for some time and under medical care, but continued to attend to his work until the day before his death, when he remained at home. The day following, feeling somewhat better, he returned to his work in the mine, but before nine o’clock he had ceased to work and live. The end came suddenly, and to many unexpectedly. The funeral took place on the Sunday following, and was attended by a large number of people from the surrounding neighbourhoods. His death is a great loss to the circuit, and more particularly to the Houghton Church, in which he took great interest. His conversion took place about thirty years ago in a revival of religion conducted by Miss McKinney. In the early part of his life he was wild and reckless, and cared not for the ways of religion. But the revival and the influence of a faithful wife proved the turning-point in his career, for ever afterwards he continued a consistent profession. He was the Steward of the above circuit from its formation, during the ministry of the Rev. J. Phillipson, and in this capacity rendered signal service, being eminently adapted for it because of his methodical, painstaking, and punctual habits. His attendance at the means of grace had been commendable; he even being present the night immediately preceding his death. He greatly enjoyed the services of God’s house, and in recent times there has been noticed a growing mellowness as he neared the heavenly kingdom. But it was not only in the Church that he distinguished himself, but in various forms of service outside. For many years he was chairman of the Newbottle Co-operative Store, and was also a member of the Local Board, of which he was chairman three years. He was also a member for some time of the Urban District Council when it came into existence. For a number of years he sat on the Board of Guardians, and in that capacity rendered able service, very often sacrificing his own personal interests that he might serve the public. He had a strong personality, was a commanding figure, and had great influence over men because of his strong grasp of matters. He was a faithful husband, a kind father, and a worthy citizen. He has left a widow and two sons with their families, who mourn their loss, but they do not sorrow as those without hope, for they believe in Christ, “Who is the resurrection and the life.”