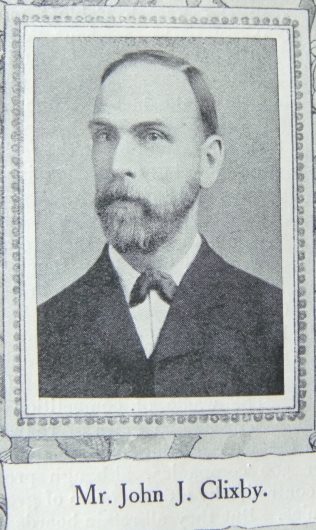 Mr. Clixby was born at Midhope, near Penistone, and “born again” at Stocksbridge in his 20th year. He is the product of village Methodism and Godly parents who were Primitives. A earnest man with a strong grip of the “essentials,” he has sought first the Kingdom, being a Local Preacher for thrity-one years, a life teetotaller, and none smoker. Blessed with a true help-meet, his home life is happy, and all the family are members of our Church, two sons being “locals.” At present he is Sunday School Teacher, Class leader, Society Steward, Trustee, Local Preacher, and Senior Circuit Steward in Barnsley I. Twice he was honoured as Delegate to District Synod, and once to Conference, besides receiving a long-service Diploma. His family are hearty supporters of the Missionary cause, and their genial home hospitable to all God’s servants. For twenty-eight years our friend has been connected with Barnsley Primitive Methodism.

John was born in 1860 at Midhope, Yorkshire, to parents William and Elizabeth. William was a tailor.