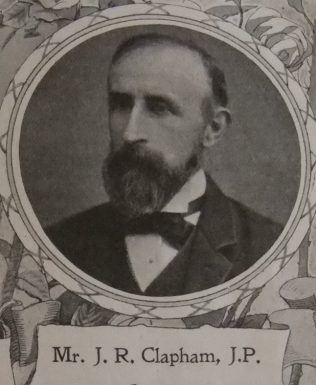 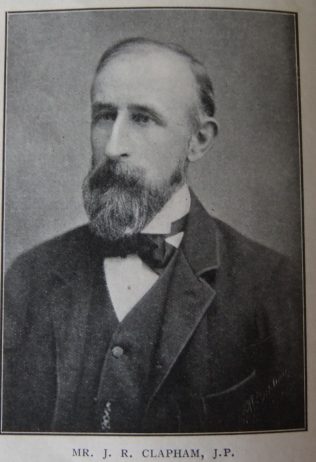 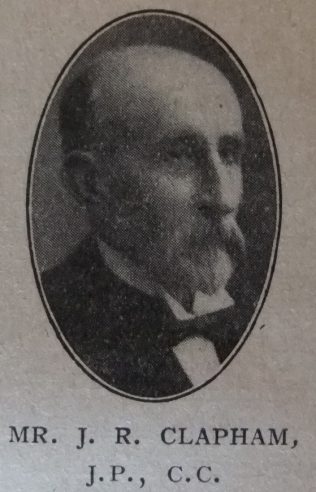 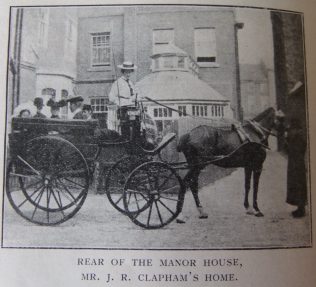 The Stockton Circuit Steward bears an honoured name. His father, Mr. Robert Clapham, some time in our ministry, famed for his liberality to his church and Vice-president of Conference, enabled the Stockton Circuit to make great strides. In the place of one minister in 1892, there are now three with a H.L.P. whose salary the steward himself pays. Since 1897 four new chapels have been built and a small one purchased at a total cost of £11,100. Mr Clapham offered £500 towards debt reduction and with an additional minister’s house, with the result that £1,200 has been raised. With three manses and seven chapels the debt is only £4,500. Besides being a local preacher Mr. Clapham finds time for much public work as a County J.P., a County Councillor and President of the Stockton Chamber of Agriculture. In his beautiful home at Yarm Mrs Clapham dispenses a gracious hospitality, and several members of their family are actively engaged in church work.

John was born in 1847 at Yarm-on-Tees, Yorkshire to parents Robert and Elizabeth. Robert was a rope and twine manufacturer.

John succeeded his father in the manufacture of rope and twine and was also involved in shipping.

From 1892, John was a Poor Law Guardian in addition to the community work identified in the 1907 sketch. He also served on the Board of the Tees Conservancy.

In the Yarm PM Society, John was Superintendent of the Sunday School, a Class leader, the Society Steward, and the Treasurer of the Trust. He was a local preacher for over fifty years.

John became Circuit Steward in 1892. By 1912 the level of debt in the circuit had been reduced to £3,000. This debt was cleared by the time of his death, although a small amount remained, circa £100 related to the Newtown Church built circa 1912.

John was a financial supporter of the Missionary cause, the PM Orphanages, Elmfield College and the Itinerant Friendly Society, among many others.