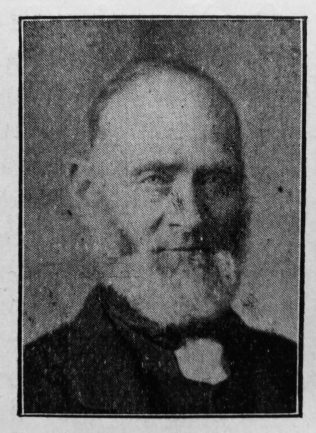 It is not given to many of the sons of Primitive Methodism to be a local preacher for over sixty-two years and continue to preach up to the end, yet such was the case with the subject of this sketch. Joseph Collinson was born at Middleton in Teesdale, in 1821, and became a local preacher in our Church at the age of twenty. Three years after this he went to Spain and had a rough passage, in fact it was so wild that the captain gave up all hope of reaching land. Our friend was the only praying man on board, and while the storm was at its worst he pleaded powerfully with God, and when the vessel reached port in safety the captain declared it was through the prayers and faith of Brother Collinson that they had been saved. After spending two years in Spain he returned to Middleton, and at the age of twenty-eight he married and went to Frosterley in the Westgate Circuit, where he remained forty-two years, then at the age of seventy he removed to Masham and spent twelve years there, and then at the age of eighty-two he returned to his native place to die. He was one of the finest local preachers that the north has ever produced, and while he did grand service in all the circuits named it is in the Westgate Station where the prime of his life was spent and the noblest of his work was done. He was blessed with a marvellous constitution and enjoyed the best of health. Few men could attempt what he did. When the great revivals were moving Weardale, Brother Collinson took a prominent part. He has been known to take a three weeks’ mission at Westgate in the dead of winter, and after working in the mine all day walk there and back each day, a distance of sixteen miles. Though he never went to school as he started to work at the age of eight, he was always learning, and those who knew him best testify to the marvellous power and ability which he acquired as a preacher of the Gospel. Mr. George Race, of Westgate, declares that he was one of the grandest preachers from every point of view that he had ever heard, and that is no mean testimony to his ability. His name will ever be sweet and fragrant in the Wear valley as a true and loyal Christian. Magnificent success attended his efforts, and in the great day hundreds will thank God for the ministry of our friend. Many of the converts remain to this day, truly devoted and loyal sons and daughters of Primitive Methodism. I would like to have given a few incidents from the long career of Brother Collinson, but one must suffice, the story of a remarkable dream.

Over forty years ago, Brother Collinson was appointed to preach at the Watch Night service in Frosterley Chapel, and on the night previous, while meditating on the text “Behold I lay in Zion for a foundation a stone, a tried stone,” he fell asleep, and in the course of his sleep had a dream. On each side he saw three rough stones and three smooth stones. An angel appeared, and turning to the three rough stones, asked, “What are these?” Joseph said, “These have just come from the quarry and will take much dressing and chiselling before they are ready for building.” Then the angel turned to the smooth stones and asked, “What are these?” When Brother Collinson replied, “These are smooth stones and will not take so much work as the others.”

Then he awoke and thought no more of the dream till the next night when his sermon was finished, and in the prayer meeting which followed, three of the roughest men in Frosterley and three women were soundly converted, then the interpretation of the vision came to him. And some of these stones still occupy a place in the building.

Brother Collinson was no seeker after Connexional honours, and yet it is worthy of note that he attended the first Conference held at Newcastle-on-Tyne, in 1842, and walked 32 miles over the moors to do so.

He continued farming until the eighty-second year of his life and then came to Middleton to enjoy a well earned rest. But the Master’s call was near, and three months later he passed peacefully to his reward.

He was buried in the Frosterley Churchyard where rest many of his former companions and friends. The service was held in Bridge End Chapel and was largely attended, friends coming from all parts of the North to pay their last tribute to his memory. The Revs. John Strong, C. Roberts, and Joseph Toyn took part in the service.

Joseph was born in 1821 at Middleton-in Teesdale to parents William, a smelter and Nanny.

Joseph was buried at Frosterley on 17 August 1903.