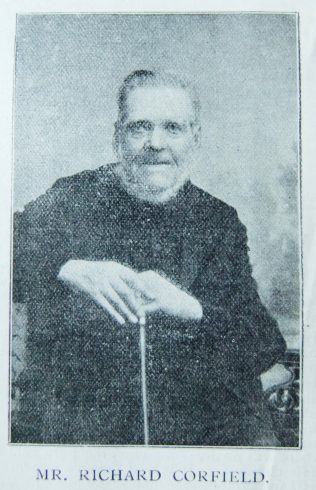 Transcription of Sketch in the Christian Messenger by J.P.L. (James P. Langham)

SOON after I came to reside in the city of Liverpool, I received a letter requesting me to call on Mr. Richard Corfield, local preacher. Not being familiar with the topography of the town, I turned to a directory to discover the whereabouts of Mr. C’s residence. I found this entry, ‘Arrad Street, 12, Richard Corfield – gentleman.’ When I reached the street named, I found it respectable, but not aristocratic – not such a street as gentlemen usually select to reside in. However, I had lived long enough to know that a man’s status is not to be decided by the street he lives in. Fine squares and palatial houses are sometimes inhabited by men who are not gentlemen; and mean streets may furnish dwellings for some of nature’s noblemen.

It was not long before I rapped at the door, and gained admission. When I entered Mr. C’s room, and looked upon him for the first time, I did not at once decide whether the directory had, or had not, correctly described him. I determined to let the man show himself, before coming to a decision. We entered into conversation; and the longer we talked together, the more convinced was I that the description was correct. I found that the Lord had given him intelligence, and that he had not neglected the gift that was in him, but had cultivated his faculties and used his powers of observation with good results. Though his body was bowed with nearly ninety years, his mind was still erect; and he could not only retail ancient history, but give wise counsel for present times and needs. He told me he had been a local preacher for nearly seventy years; and that his religious life was nearly contemporaneous with the history of Primitive Methodism in Liverpool. One thing in which he greatly rejoiced was that he never but once missed an appointment in all those years; and that was through an error for which he was not responsible. In the city of Liverpool, and for many miles around it, he had unceasingly laboured to make known the gospel of redemption, and had realised much success in his work.

When he first came out of Shropshire to reside in this city of many nations, he found Primitive Methodism almost unknown in it. To-day its position is such as to occasion him genuine rejoicing, although (compared with the immense population) still weak and uninfluential. It is certainly not fair to judge the work done by our beloved Connexion in this city by the present number of members and chapels. Multitudes have been helped on the way to heaven who have never been enrolled in the church books. This our friend was wise enough to see; and he rejoiced over the real advancement made by the Church of his choice during his life-time. I continued to visit him until shortly before his death, on January 11th, 1900. Each time I saw him my estimate of his character and usefulness rose higher, and my interest in his stories of the old days increased. He had many good things to tell about the pioneer work of himself and the early ministers and their fellow-labourers. Coming as he did, a rough, raw youth from the country, he was at first somewhat dazzled and confused by the bustle and glamour of city life.

Soon after he became a dweller on the banks of the Mersey, he heard of the great marvel of the third decade of the nineteenth century – STEAM COACHES. Some of his working companions persuaded him to spend one Sabbath morning in going to see them at work. He never forgot his first sight of the railway and its steam-propelled coaches. Yet he came home from the sight sad at heart, because he had allowed an interesting spectacle to keep him away from the means of grace. Now-a-days, some people are not in danger of being kept away from the house of prayer by steam-coaches, but require a steam-coach to drag them there. It never occurs to them that they are forfeiting a privilege by their absence but they often think the preachers should be very much obliged to them for occasionally conferring upon them the favour of their presence.

From his diary of those early days of pioneer work, we learn how Sundays were crammed with mission work, and week evenings utilised for gaining spiritual help at preaching and prayer meetings. That he profited from the use he made of his time, is evident from the position he soon gained in the Liverpool circuit and district. He held the office of circuit steward for fourteen years; and again and again was sent as delegate to District Meeting. Twice also he represented the District in Conference.

Mr. Corfield was in the habit of writing down, from time to time, little items of Connexional history, which he thought worthy of record. One of these scraps of information throws into striking relief the work and experiences of a pioneer travelling preacher. He records that John Ride came from Preston Brook to mission Liverpool; and that he was put in the Bridewell for preaching in the open-air.

In those days women were employed as travelling preachers, and Sarah Spittal was for a time in charge of Liverpool mission. About the time that Mr. C. came to reside in Liverpool the station was thought sufficiently developed to warrant the stationing thereto of a married preacher, and J. A. was accordingly appointed. Then came the important business of securing and furnishing a house. As a King’s ambassador, what could be more appropriate for a preacher than to reside at court; and therefore a court-house was secured. Now, a court-house has some advantages not possessed by all houses – you are never puzzled through which door to seek an entrance, for the builder saves you all that trouble by providing only one. That one door opens immediately into the reception room, which the architect has so cleverly constructed that it serves the purpose also of kitchen, drawing-room, and study. Upstairs the same clever economy of space is observable, and dormitory, dressing-room, bath-room, and wardrobe are skilfully packed together in one room. When this spacious and convenient courtly dwelling had been secured, a committee of ways and means was called to arrange for its furnishing. The first thing the committee had to do was to get money to purchase furniture. The money was raised by a subscription of two shillings from each member, the furniture was purchased, and the preacher and his wife took proud and joyous possession of the court-house. However, the preacher did not long remain in occupation of the ‘official residence,’ removing at the end of one year, and thus fulfilling the old song: ‘Man wants but little here below, nor wants that little long.’

The difficulties of pioneer work in Liverpool Mr. C. informed me, did not all arise from poverty and persecution. Sometimes the travelling preachers were themselves the occasion if not the cause of trouble. It sometimes happened that the ‘super’ could not agree with his ‘colleague,’ and then ructions followed. In 1844 two eccentric men happened to be stationed together; and some amusing as well as trying things occurred. The superintendent in some mysterious way had become possessed of £100. Fancy a P.M. preacher sixty years ago worth a hundred pounds! This money he invested, and unfortunately lost. Such a calamity filled him with despair; and be poured his complaint into the ears of all who would listen. Meeting his colleague by the riverside one day, he told him, with many sighs, the story of his sad loss. When he finished, his colleague replied, ‘Well, Sir! We men of property must be prepared to lose.’ ‘Men of property,’ exclaimed number one, as he looked in the inperturbable face of number two, ‘pray, what property have you ever lost? ’ ‘Well,’ replied number two, ‘I had a little dog of which I was very fond; and coming down to the docks this morning I lost it. You have lost your hundred pounds, I my little dog.’ We men of property must stand to lose. Having discharged his Parthian arrow, number two turned upon his heels, and left number one to meditate upon the unavoidable risks which all owners of property necessarily encounter.

At a time when the Itinerant Preachers remained, in many cases, only one year upon a station, a layman with intelligence and strength of character was sure to secure a controlling position in circuit management. The Liverpool Circuit found in stalwart Richard Corfield a counsellor and leader in whom it could confidently trust. Through long years he served in many ways the true interests of the station, being always willing to labour for its advancement. Towards the end of his life increasing infirmity compelled him to abstain from public work; but he manifested to the very last his unabated concern for the Connexion’s usefulness and success.

One of his last conversations indicated his spiritual ripeness. He said to a friend who visited him two or three days before his death, ‘I used to think Heaven was a very long way off; but I don’t think so now. I think it is very near. In fact I feel it all around me.

The heaven which he felt all about him opened to receive him; and he was not, for God took him. His funeral was attended by a number of ministers, some of whom had known him many years. At Anfield cemetery a company of weeping friends saw his mortal form interred, but joined in the song of triumphant faith, ‘We shall meet beyond the river, where the surges cease to roll.’

The Primitive Methodists of the twentieth century in Liverpool will owe, though they may be unconscious of it, a great debt to Richard Corfield and his fellow pioneers, who worked so unselfishly and so perseveringly to establish the cause of God in this cosmopolitan city. His work on earth is finished, but the influence of the life he lived and the work he did remains with the church as a heritage of blessing.