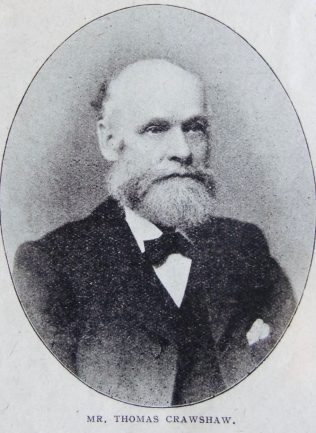 Transcription of Sketch In the Christian Messenger by W.E. Goodreid

Thomas Crawshaw is loved and revered in Huddersfield Methodism. He has a larger knowledge of the history of our church locally than any living man. He recollects many a tribute paid in his home to the Rev. John Verity, who created a great impression on the religious life of the town, and he was in personal contact and served under the superintendency of the Rev. W. Antliff.  Born in 1835, he is now in his eighty-fifth year and still in active service. In physique he is small and frail, but his mind is alert and there is an unusual sweetness in his personality. He is of another generation than ours and his library is a memorial of the dust of theological controversies long since dead. He is a splendid example of the men who won respect for Primitive Methodism when it had many critics and few friends. From 1856 he has kept a diary of his preaching appointments, and it is a record of long travels on what were then lonely roads. He began his diary with the motto registered when he married: ” Serve God, Family Worship, No Debts,” and he has kept his ideal. His first appointment as a Local Preacher was at Snowgatehead and at Hartshead, and involved a walk of some twenty-six miles, but he added with a quaint smile as he narrated the fact “but the chapel was full when I got there.” He has a rooted objection to using tramcars on Sundays, and when he preaches he always walks to his appointments. He has been a Local Preacher for the last fifty-four years, and has been most diligent in the exercise of his ministry. He has served the church as Sunday-school Superintendent and Teacher. He is a Trustee of South Street and Northumberland Street Chapels and has had a special care for the struggling causes. In 1916 the circuit made him a testimonial as a recognition of his long and faithful service, and some of us will remember for many years his beautiful reply and the glad pleasure that shone in his eyes. In 1911 he requested the plan makers to plan him round the circuit once again as he felt he would like to preach in every pulpit before the end, He has since repeated it and may do so again. I have always loved to hear him pray, for there is a tender and sweet note in the voice that pain and many sorrows have put there, and out of a full heart he talks to God like one who has known Him face to face.

Thomas was born in 1835 at Almondbury, Huddersfield, Yorkshire, to parents William and Susannah. William was a weaver.