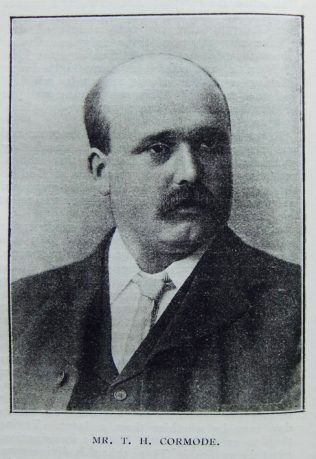 Transcription of Sketch in the Christian Messenger by T.M. Pinnock

MR. T.H. CORMODE, who has just been elected to the House of Keys by the Peel Constituency, is a local preacher in the Douglas, lsle of Man, Circuit, and is certainly one of the most popular men in Manxland.

He was born in the year 1862 within twenty yards of our little Chapel at Quine’s Hill. At three years of age he began to attend our Sunday School, and has been connected with it ever since.

In a great religious revival, conducted by the late Rev. B. Dain, he was converted to God in the nineteenth year of his age. Six months after his conversion he was asked to preach, but shrank from the work, thinking he had not ability for it. Necessity, however, was laid upon him and he made the attempt. Never since has he doubted his divine call. A year later the Quarterly Meeting recommended him for the regular ministry, but though coveting the ministerial office he never realised a clear call from God to undertake it.

The first thing that made him notorious was a paper which he read at the “Manx Nonconformist Council” on “Hindrances to the Progress of the Kingdom of Christ in the Isle of Man.” At that time the Isle of Man Times was well-nigh omnipotent with Manxmen. Everybody read it, and a great many accepted its teachings as implicitly as they accepted the Gospel. It was run in the interests of drink and devilry, and it so mercilessly abused anyone who spoke out for temperance and righteousness that scarcely a man was found with courage enough to open his lips against it.

A curate of St. George’s, Douglas, who preached a sermon dealing in a mild way, with the morals of Douglas, was so shamefully black-balled by the Times that the officials of that church thought it expedient to send him away. Of the other three Douglas papers, only one was on the side of temperance, and its articles were very meek and mild.

In the paper which Mr. Cormode read at the Council Meeting he mentioned as the first great hindrance the persistent opposition of the Press to temperance and righteousness, and gave the Times a terrible drubbing. He also dealt with the morals of the town in language clear and stormy. Mr. J.R. Cowell, then the foremost politician in the Island, scarcely waited to hear the last word of his paper, before he sprang to his feet, complimented him upon his great courage and endorsed every word he had said. Other influential men, who, for years had been wishing to speak out but had lacked the courage to do so, followed on the same lines. When the report of the meeting and the speech in extenso was published by the Press, people everywhere were asking, “Who is Cormode?” The Times whined like a whipped dog, and insinuated that it was nonsense to suppose that a country blacksmith could have written the paper, and suggested that he had simply been put up to read what another man had written. There was subsequently a tremendous amount of discussion upon his statements, many people lost faith in the Times – a hundred left off reading it. At present this paper has not much influence in the Island, and all the other papers are on the side of temperance .

Out of the scores of political and temperance speeches which our friend has delivered, and which have been fully reported, three may truly be said to have created a great sensation.

The first of these was at the Annual Meeting of the “Manx Temperance Union,” then a great institution. Mr. G.A. Ring, now Attorney General, was at that time Advocate for the Licensed Victuallers’ Association. Being a powerful speaker, acute, and sarcastic, he became absolute master of the “Licensing Courts.” The B.W.T.A. had that year distributed circulars in all the churches, asking the congregations to pray that the Licensing Courts might be divinely guided and restrained. Ring sneered and jeered at these circulars, and laughed at the idea of prayer about such a thing as granting or withholding licenses. Mr. Cormode figuratively stripped off to him, and gave him such a drubbing that all sorts and conditions of men thanked him for his work.

The second speech referred to was delivered in the Victoria Street Wesleyan Church, where he struck the first blow in what was proved to be by far the fiercest political battle ever fought in the Island, namely, the Permit Battle. He gave the Governor, the Clerk of the Rolls, Deemster Gell, and Major Stephen very rough handling, and prophesied that Mr. J.A. Mylrea, who the Douglas people looked up to as a god, would either climb down or be knocked down from the pinnacle of self-conceit and arrogance to which he had climbed.

But the greatest sensation was created by a speech on “Linked Motion.” He explained the principle of linked motion in machinery, and showed how the same principle was carried out in Manx affairs. The Rev. Edward Quine  declared that that speech was worthy of a Gladstone. The drink and devilry gentry asserted that he was cherishing unfounded suspicions; but after the collapse of Dumbell’s Bank everybody saw that he was justified in every word he had said, and when Mylrea went down as he had predicted, Cormode was hailed in the Island as a prophet.

The largest meeting he ever addressed was on the occasion of the Band of Hope Jubilee. Three thousand five hundred children were seated in stages, and there were nearly six thousand adults present. The meeting was held in the Palace, which is a very difficult building to speak in. His previous practice, however, of addressing large companies in the open air at school anniversaries and camp meetings stood him in good stead, and he was distinctly heard by all present. Mr. J.H. Raper, of London, the only other speaker, did not succeed in making more than half the audience hear. After that meeting one of the newspapers dubbed him the “Manx Orator,” and that title stuck to him a long time, and is sometimes heard even yet, though he has done his utmost to discourage it. Once when he went to Ramsey to preach, he was so greatly annoyed to find that the town was placarded with flaming posters announcing that the “Manx Orator” would preach in the Primitive Methodist Chapel, that he threatened to return without holding the service, and made them promise that they would never again advertise him like a clown in a circus. It is not only as a public speaker that Mr. Cormode excels. When he was a youth the Society for the Prevention of Cruelty to Animals offered prizes for essays on “The Treatment of the Horse.” He won the first prize. He also won the first prize in the first competition in this magazine for a sermon outline on a given text. For some years past he has regularly written the principal leaders in one of the Douglas papers, and thus keeps up his literary gifts. He has also put in a good deal of hard work for Rechabitism, and held every position in the power of the Rechebites to bestow. He was the first to moot the idea of a Local Preachers’ Association in the Island, and with the late Alderman Keig started the Association, which is now a great institution.

Without doubt he is the most popular local preacher in Ellan Vannin, and never misses an appointment, however long the journey or small the congregation. He is an earnest and devoted class leader and Sunday School superintendent – a true and faithful friend, and a man whose public and private character will bear the strictest investigation. The Manx Sun very truly said, after his election to the House of Keys : “That the honour was the due reward of faithful and unselfish service rendered during the last fifteen years for the public weal.”

Thomas was baptised on 5 October 1862 at Braddan, Isle of Man. His parents were John and Catherine.