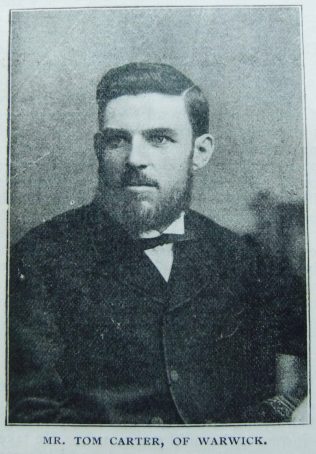 Transcription of Sketch in the Christian Messenger by H. Jeffs

A local preacher of our Denomination whose attainments and character were marked by decided originality was Mr. Tom Carter, of Warwick, who died on December 1st of pneumonia after a few days’ illness. There was no man better known in Warwick and the southern part of the Midland county than Mr. Carter, and his death cast a gloom over the town such as no local decease has occasioned for many a year. His career is worth the telling in this Magazine as an example to the young men of our Denomination. Mr. Carter, who was only forty years of age, was the son of a miner at Radstock, near Bath. His father and mother are both deceased, so there can be no harm in stating now that his home training was a very unhappy one. The father, like too many of his fellows, was addicted to drinking, and the son told the writer of this article some very painful stories of his experiences as a boy and as a young man. But none the less, for many years before the father’s death, he cheerfully contributed, although never blessed with more than modest means, to the comfort of both his parents in their declining years. Mr. Carter had practically no school education at all, for he was sent to work at the pits before he was ten years old. He taught himself to read, and in his consuming eagerness for knowledge he often sacrificed a meal in order that with the pence saved he might purchase a book. Fortunately he early came within the influence of a Primitive Methodist Society, and as a very young man conceived the ambition of being a preacher. He commenced to preach at 15 years of age, at which time the books he possessed besides a Bible were one or two Sunday School prizes. It was a great day when, having earned half-a-crown, he invested it in Field’s Handbook to Theology. Appetite came in eating, and young Carter carefully put by every penny till he had 7s. in hand. With this sum he walked eight miles to Bath, and looked long and carefully round the secondhand bookshops. At last he fixed on five large volumes of Dwights Theology, and asked the price. His heart sank within him on hearing it was 5s. He told the bookseller of his predicament, and the kindly man let the volumes go at 4s. With the volumes under his arm the lad trudged with a proudly beating heart back to Radstock. His brother, a valued local preacher in Poplar, still possesses those volumes, which were sold to him in order that Tom might purchase Watsons’s Institutes with the money. Rev. W. Radnor, the Circuit minister, helped the lad with his reading, and when Mr. Radnor was ill, young Carter undertook his work for three months. He had preaching engagements nearly every Sunday in the chapels of different denominations. The brothers conducted jointly week’s missions in different places. The brothers went to America, after a year’s work or two for the Prudential Assurance Co. Both preached on the ship, and at the village in which they settled for a time they were at once set to work at preaching by the minister of the Methodist Episcopal Church. Tom could have got a church of his own, but the brothers’ hearts were in England, and they re-settled in their old denomination.

Mr. Carter went to Warwick when he was four or five and twenty years old as agent of an insurance company, and settled in the little Stand Street Chapel of the ancient Midland borough. He soon became known, however, by his ability and his remarkable speaking power, far beyond the walls of the Chapel. He was welcomed as a preacher by the Wesleyans, the Baptists, the Congregationalists, and others in Warwick, Leamington, and the district. He had a high sense of his responsibility as a Christian citizen, and rose surely and swiftly to the position of leader of the working-classes in the district, a position which he retained until his death. Liberal candidates both of the borough and county constituencies found in Mr. Carter their most effective champion in the towns and villages of South Warwickshire. He welcomed the P.S.A. movement as a means of bringing working men under Christian influence, and the P.S.A.’s at Warwick and Leamington owed much of their great success to his personal influence and his speaking ability. Three or four years ago Mr. Carter was elected President of the Warwickshire Federation of P.S.A.’s. He took also a leading part in the formation of the local Free Church Council, of which he was the Secretary. The Council organized open-air meetings after Sunday evening service on the Common and in the Market-place, which attracted large congregations of people. Mr. Carter was an enormous and astonishingly Catholic reader, but his favourite subjects were theology, the higher criticism, ecclesiastical history and comparative religion. It was no wonder that, reading so much and such varied literature, Mr. Carter sometimes had a difficulty in ascertaining exactly where he was in theology, but in the pulpit and in the prayer meeting of the Primitive Methodist Chapels there was always the ring of the passionate, intense, personal conviction of saving Grace as the primary essential of religion. Mr. Carter remained staunch to this cardinal principle of Methodist theology, although his study of the theology of many schools and many Denominations, some of which seem to be at opposite poles to each other, generated a catholicity of sympathy with various views, that often puzzled men who knew Mr. Carter only superficially, but which those who enjoyed the pleasure of his intimacy were able to understand. He numbered among his friends the Roman Catholic priest, the Unitarian minister, the Churchman, the Congregationalist, the Baptist, and he delighted to discuss with each their respective theories of what constituted Christianity, and in any practical Christian work that any of them were doing he was willing to give his personal help. The working men elected Mr. Carter to the School Board and the Warwick Town Council, where, though he was a fearless champion of their cause and a forcible upholder of democratic ideals, he won the thorough respect of his Conservative colleagues, who recognised in him an honest but courteous and conciliatory man.

It is not a year since Mr. Carter resigned his seat upon the Town Council in order to accept the congenial position of public librarian. The Warwick Free Library was one of the first founded under Mr. Ewart’s Free Libraries Act. It was established in an old mansion abutting on the parish churchyard, with a lovely garden at the back, which was the delight of the new librarian and his family. The free library was founded in a fit of enthusiasm, and was well stocked with books, but the enthusiasm cooled, and under successive librarians of a conventional type the library was allowed to get terribly behind the times. lts shelves were crowded with works long since dead, while hundreds of books by the most noted authors of the last third of the Nineteenth Century were conspicuous by their absence. Mr. Carter set himself to change all this, and speedily impressed his views upon the library committee. He overhauled the nine thousand volumes on the bookshelves, compiled with enormous labour a new catalogue which won him the highest praise, weeded out a vast amount of literary rubbish, and procured a large number of books which the library sadly needed. He vigilantly scanned the literary papers to discover what books were best worth buying. He introduced many new papers, magazines, and first-class reviews into the reading-room. He constituted himself the literary adviser of the town, both by personal advice to borrowers of books and by articles pleasantly and intelligently reviewing the magazines and reviews as they came in each month, so as to indicate articles that were worth reading, and also giving similar notices of batches of new books added to the library on his recommendation. In a long chat in the late summer with the author of this sorrowful tribute, with whom for many years Mr. Carter had maintained a literary and theological correspondence, he expressed his strong desire to get the studious young men of the town together in the library, and to induce experts in literature to give them lectures on courses of reading. The books indicated in the courses were to be found in the library.

It is one of the mysteries of Providence that a life so useful, so rare in its quality, and so rich in influence, should be cut off in its prime, and those whose hearts are sore as they think of “the vanished hand” and “the voice that is still” have had to remind themselves that Gods way is always the best way, and that He sees the sunlight where we see only the deep shadow. Such a man will be sadly missed in a town which, like most ancient country towns, is not too well provided with men who regard mind culture and soul culture as of superior importance to the successful carrying on of business. Mr. Carter was one of those men who believed that all his faculties were God-given, and that his intellect and his hands, as well as his heart and soul, should be consecrated to Christ’s service. Physically, he was born a weakling, and all through his life he was terribly hampered by bodily disabilities. The very insurance company which he served refused to take risk on so “poor” a “life.” Poor, yes, from the point of view of a prosaic actuary, but many an American trust-organising multi-millionaire was, as regards the truest riches – the riches which confer the greatest blessing on the possessor, which flow out in streams of blessing to others, and “which neither moth nor rust doth corrupt” – a pauper by the side of Mr. Carter. In spite of disabilities that would have crushed a less dauntless spirit, Mr. Carter forced his way to the front, and yet he did not force his way – there was never the suspicion of pushfulness about him, but he came to the front as if unconsciously, and took the position “as to the manner born.” He is missed and mourned to-day by thousands who, until he was gone, scarcely realised how high he rose above the average and how devotedly he had served them. On the day of the death the Countess of Warwick sent, from the stately Castle washed by the waters of the Avon, a very tender womanly letter of sympathy, in which she said that the news had made the Earl and herself very wretched, and the town would not seem the same now that “Tom Carter” was no more. All denominations in the adopted town he had learnt to love were united round his grave, but his own Primitive Methodist denomination, to which he remained unswervingly loyal in spite of powerful temptations, were the chief mourners, next to the stricken widow and the boy and girl. This denomination throughout the land ought to know that such a man was one of its sons, though he never took part in its larger councils. The denomination will have a tender thought and breathe a silent prayer for the stricken ones.

Tom was born in 1861 at Paulton, nr Radstock, Somerset, to parents Henry and Harriet. Henry was a coal miner.

The 1861 census identifies Tom as a coal miner. Before becoming a librarian, Tom worked as an agent for Prudential Assurance.