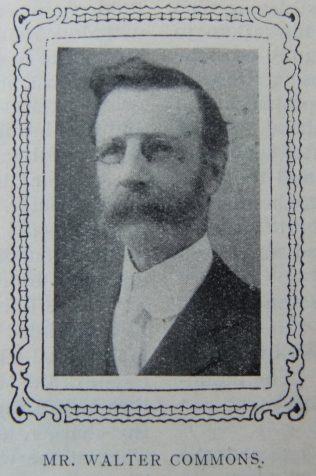 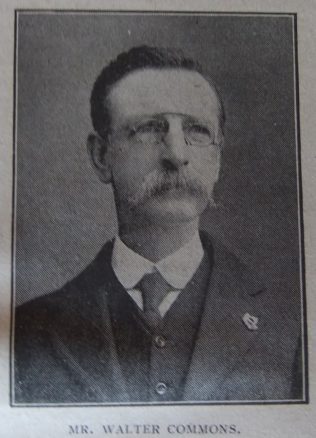 MR. WALTER COMMONS was born at Upper Langwith, in Derbyshire, in 1855. As a lad he attended the Cotton Mill Langwith Sunday School, connected with the church of which his father was Society steward, Class leader, and local preacher. Leaving home for service he attended the State Church until the age of twenty-five, when, removing to Mansfield, he was privileged to return to the church of his choice, and was converted under the ministry of the Rev. Silas L. George. After a short stay at Mansfield, he soon attained full local preachership, and became (in succession to, and on the death of his father) Society steward, Class leader, and Sunday school superintendent.

Removing to Ipswich in March, 1899, he joined the Clarkson Street Church, in which he has found congenial and abundant labours, serving the church in the capacities of Sunday school superintendent, Class leader, leader of the Adult Bible Class, and has been for the last eight years President of the P.S.A. For five years he has held the office of Circuit steward, and is now the Circuit secretary, and President of Christian Endeavour, and Society steward. He has Delegate three times to District Synods. He is on the Executive of the Free Church Council, and is Chairman of the Norwich C.E. Council. The life and labours of our brother are marked with much spirituality and success.

Walter was born in 1855 to parents John and Sarah. John worked the land.

His obituary records that Walter was a member of the Norwich District Committee and twice attended Conference.

Walter married Mary Ann Ball (abt1861-1947) in the spring of 1886 at Mansfield, Nottinghamshire. Census returns identify one of three children.