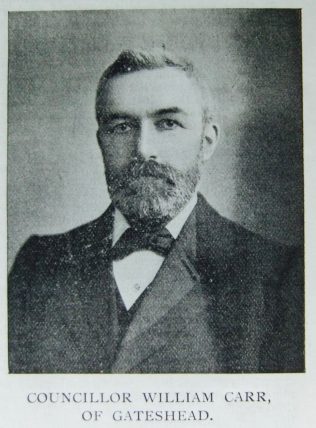 Transcription of Sketch in the Christian Messenger by W.M. Patterson

So long as Primitive Methodism has to any appreciable degree men like William Carr, of Gateshead, amongst its local guardians, so long will the spirit and traditions of the body be maintained. Another temper, which is more than the legitimate evolution, that has its basis in improved education and a larger outlook, has invaded the community. Other aspirations than those that make for spiritual growth and ‘the beauty of holiness’ have found a large place in our societies, by which their entire character is being transformed. These are neither helpful nor healthful. We are growing at a rapid pace in social status; we are losing grip of the multitudes as a moulding force and as an effective factor in the furtherance of the kingdom of God amongst the common people. It is well for us to face facts that in our hearts we believe.

Men of the type of William Carr, however, save us from forgetting our origin and our most useful place in Christian life and service. His name is mentioned without the usual social prefix, not from want of respect, but because he is so affectionately spoken of by those who know him best. He has passed his half century, having been born on the 22nd of January, 1850, and has lived a full life in the place of his birth. His parents were devoted members of the Old Nelson Street church, Gateshead. His mother is still alive, and continues to be a member of the same society, which now worships in Durham Road Church.

At three years of age the subject of our sketch was joined to the Sunday school at Nelson Street, and from the work he has never severed himself. When fourteen he and his lifelong friend, Robert Scope, were converted; he became a teacher at fifteen, and was put on the preacher’s plan at nineteen. He also joined the Mutual Improvement Society, which had for guides and instructors such men as the Revs. J.A. Bastow, Thomas Greenfield, and Walter Howchin. He was recommended for the ministry, but the doctors expressed an adverse opinion as to his health, and he had to reluctantly decline the call.

Gateshead (and especially the region known as Sunderland Road), has gained by Mr. Carr stopping at home. He has always been possessed of the missionary spirit. In speech and activity the salvation and sanctification of men are his aims. For many years he has been in the forefront of the earnest spirits in Gateshead who have been planning and working out schemes of church extension, and he and they have had exceeding great reward. Out of the efforts of the Vigilant Band, of which he was a member, have sprung the present Prince Consort Road Church, with its 150 members; the Dunstan mission, which, after repeated reverses, has now a membership of about 50; the Teams mission, with its hundred members; and Sunderland Road, which has now 150 members. To the latter Mr. Carr has applied himself with a zeal and a success which his brethren throughout the district fully appreciate.

Always a young people’s man, Mr. Carr threw himself into the Christian Endeavour Movement with characteristic fervour. In this department of work he has also been successful, and has large and flourishing classes at Sunderland Road. Here a Christian Endeavour Hall, the first in the Connexion, has been built, it being opened on August 24th, 1901.

Fervent in spirit, Mr. Carr has also been diligent in business. He has known stress, but stress spurred him on to more enterprise, and the business he began in 1880 has developed into the largest confectionery works for 140 miles. It has been formed into a limited liability company, the workmen being presented with shares up to the Value of £1,000. Four years ago he was elected a member of the Town Council, after a stiff fight with a publican and a Roman Catholic; he subsequently retained his seat by an enormously increased majority.

Such is the preacher, leader, manufacturer, and councillor as he lives and labours amongst the people of his native town. In numerous ways he has been told how highly he is regarded by his townsfolk, workpeople, and fellow Christians. These are the men that are the salt of the earth. May their tribe greatly increase.

William was baptised on 17 February 1850 at Gateshead, Co. Durham. His parents were George and Elizabeth. George was a provision dealer.

William began business life as a provision dealer before embarking on confectionary manufacture.