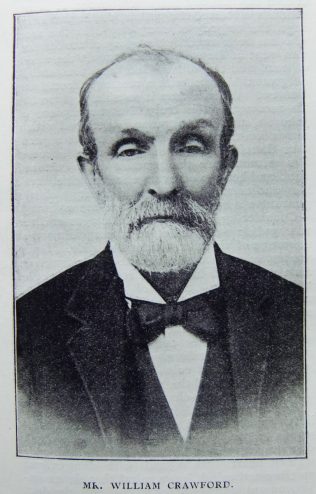 Transcription of Sketch in the Christian Messenger by “Stephen Urwin”

MR. WILLIAM CRAWFORD is a Northumbrian by birth and service. Born in the year 1839, his days are now ripe. The work of the church, the social betterment of the mining community have had the devotion of his life. His name has ever stood for advance, progress, and redemption, and the much gained, prove him to have been a distinct asset to his generation.

To him life was definite and purposeful. Ideals moved him from youth up. These were born of reason and fired by holy passion. This saved him from excess, compelled the attention of others, and inspired trust. He worked for ends, permanent when gained, and drew from the logic of experience. A worker of such balance received from his fellows a large confidence.

As a miner, Mr. Crawford laboured unstintingly for his class. He has given his concentrated attention to all that tended to ease their lot. In co-operation and trades unionism he has been a leading figure, in the advocacy of which he has gained a high place in the history of the northern miners. Their respect for the man and his work has often found expression in a tangible form. At one village the Union and public presented him with a black marble timepiece and bronze. But perhaps the greatest honour paid him by his county was in the year 1884, when they showed their admiration by voting him on a deputation to wait on the Home Secretary, Sir William Harcourt, to increase the number of mines inspectors.

The esteem in which he is still held is seen in a few lines from Thomas Burt, Esq., M.P., who has been General Secretary of the Northumberland Miners’ Union since 1865. He says: —“ Mr. Crawford is one of my oldest and dearest friends. I have known him intimately for more than 40 years. He is a man of considerable mental calibre, and of great strength of character. Under very adverse circumstances he has done much by reading and study to acquire knowledge on many subjects, and to cultivate his natural gifts. For many years Mr. Crawford took a prominent part in the affairs of the N.M.U. As a delegate to the Council meetings, as a member of the joint committee, and in other capacities, his great intelligence, his conciliatory temper, his fairness, and soundness of judgment, his courage and manliness of character, enabled him to render invaluable service to his fellow workmen. Temperance, co-operation, every movement for the improvement and elevation of the workers, and for the orderly progress of man, has ever had hls energetic support.”

Charles Fenwick, Esq., M.P.—“ For nearly half a century Mr. Crawford has been honourably associated with every movement in the North of England calculated to improve the social, political, and religious life of his fellow workmen. He has indeed ‘fought a good fight and kept the faith,’ though I sincerely trust it may be many long years before we are compelled to say that ‘he has finished his course.’ In the early days of my public career it was my good fortune to enjoy much more of his company than it has ever been possible for me to share since I entered the House of Commons; but I shall ever regard our comradeship as one of the most powerful factors in the formation of my own personal character.“

Working for the social elevation of his class naturally brought him in touch with politics. This is part of his religion. He is a firm believer that politics and religion must go hand in hand. He is a Progressive and Radical of the best type. He identifies himself not so much with parties as with principles. When the agitation of the Slave Trade stirred the spirit of this country and America he showed his independence of mind by taking the side of the north, and that when most unpopular. He was specially thanked for the part taken, and had the honour of being presented to President Grant. As early as 1867 the Franchise received his attention, and he attended a monster demonstration in Hyde Park as a protest against the House of Lords shelving the question. In Household Suffrage he also took an active part. All reforms, and whatever tended to place power in the hands of the people has had from him an unqualified support.

Mr. Crawford is a Nonconformist to the back-bone. He is as liberal in religion as in politics. The latter is part of the former, and the same spirit rules both. Liberalism is with him a living principle, and runs through all that pertains to man. He sees in the union of Church and State a disaster to the one and an unwieldy burden to the other. He advocates disestablishment as a means of re-animating the spirit of the Church, and saving her for her specific purpose, and removing from the State the temptation to corrupt the public purse. The Education Bill of 1902 has no more bitter antagonist.

Primitive Methodism is the church of his choice. Its polity is suitable to such a democratic spirit, and its teaching gives expression to his burning evangelism. His labours have been abundant. From earliest to latest hours he has travelled long miles to his appointments. He has often stepped out of one suit of clothes into another, on returning from his preaching to enter the bowels of the earth. But he has lived to see this greatly modified. In South-East Northumberland there are now five Circuits, where there were only one when he began as a local preacher. Instead of three ministers there are now nine. Many of the churches stand as evidence of his persistent toil, and even to-day he is engaged in erecting a church where there has, up to the present, been no Primitive Methodist cause. He took an active part in organising the historic missionary meeting in the West Cramlington Church in North Shields Circuit. He has filled every position that the local church can offer its laymen. Identified with the church in 1857, in the early part of the following year his name was placed on the preachers’ plan, along with Mr. J. Bell, father of the vice-president of Conference. The early associations with such a noble Christian man had much to do in laying the strong basis in the character of our subject. The value he has always attached to young life brought him in touch with the Sunday School, and for many years filled the superintendency. He has been chairman at the quarterly meeting, in the absence of the minister. His Circuit has, more than once, sent him as delegate to the District Synod, and he has represented his district at Conference.

Mr. Crawford is a preacher of no mean order, and of great persuasiveness. His style is his own, and his theology is not borrowed. A soul that has felt the heart-burden of men; that has witnessed the pathos, the honest strivings, the tragedy of every-day life; the man who has been awed by the glory of the Mount, and wept in the valley, understands the needs of men, and the will of God, and thus stands on ground his own, with a message direct from Heaven. When a man is so able to personify his message, he is truly the mouthpiece of Jehovah, and his utterance is declared with a conviction that moves and sways. As a preacher therein lies our subject’s wide success. His sermons are the product of a cultured mind and heart, and evangelical in tone, thrill his audience. His deep sincerity always guarantee a congregation above the ordinary.

Considering his early disadvantages and the vast public work done, it is surprising that the range of his information is so wide. There are few sciences with which he is not familiar. As a student all his life he is the possessor of a large library. Some of the books would make any man proud. Gifts from admirers are many. Books are not regarded by him as so much house decoration. The scoring, and soiled leaves are evidence he has read with the understanding. His library numbers some hundreds of vols., and contains many of the best books of the past, and the most reliable in this ever-changing age.

He has much faith in our ministry. He believes in a cultured evangelism. He understands too well the need of education, to speak disparagingly of a trained head as well as a trained heart. He regards with danger, not an educated mind, but a mind that shuns improvement, and yet dares to deal with the deep things of God. He has always been a minister’s man. Many can only think of him with grateful memories. He has sometimes crossed swords, but his friendship has never abated. He has enjoyed the friendship of such ministers as Thomas Smith, E. Hall, C.C. McKechnie, Hugh Gilmore, H.B. Kendall, B.A., and to-day he numbers among his friends such men as Mr. T. Burt. M.P., Mr. C. Fenwick, M.P., Alderman Ed. Lowther, J.P., and is specially intimate with the vice-president of Conference, Jas. Bell, Esq., a man of life-long acquaintance. Mr. Crawford is a man amongst men. He has a broad, tolerant, and youthful spirit, magnanimous to a degree, cheery and optimistic. The vigorous warmth of kindness, the sterling nobility of character, the keen spirit of enterprise, an honesty expressing itself in straightforward speech, with edge and point, and a friendship that commands confidence and trust are qualities of his native air and the texture of his soul. He possesses much that makes him stand out alone. His position is in the front ranks, yet he can take his place in the rank and file. His name might have been of national fame; reticence and the rare spirit of “preferring one another” prevented it. The words of Jonathan express his disposition: “Thou shalt be king, but I will sit next to thee.” In that he has displayed something better than brain power; he has showed character. While such spirit is ever admirable, in his case he has not done justice to himself. Yet, maybe, his choice is only such as men of soul can take.

He now resides at a small village in Mid-Northumberland, that looks across a charming landscape unto the hills of Scottish pride. After the day’s work is done he may be seen walking by the side of the winding rivulet, thinking of the glory of God through the beauties of Nature. This quiet is a fitting close to a long life of service to God and man. His loneliness has been made deeper since God has been pleased to call away, a little before, one of the best of women, as one of the best of wives. Mr. Crawford would never have been the man he is, nor done the service rendered but for her sweet disposition, Christian charity and robust faith. Her sympathy was his buoyancy. His human aid was in the noble woman God gave to him as wife. There yet remain by his side two devoted daughters, in whom their mother continues to live, and whose love and reverence lessens the gap that a faithful wife has left.

William was born at Wallsend, Northumberland to parents John and Elizabeth. John was a coal miner.