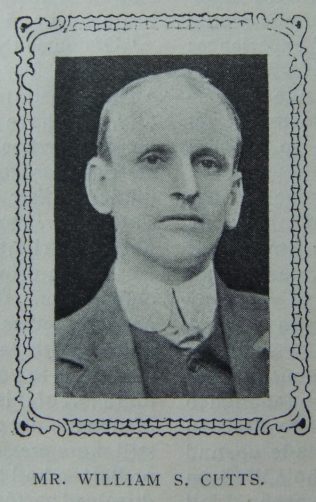 The South Elmsall Society, Hemsworth Mission, is certainly fortunate in having such a man as Mr. William Samuel Cutts as its Society Steward. Converted in early manhood, and an enthusiastic Primitive Methodist ever since, Mr. Cutts impresses all who have dealings with him of the genuine depth and intensity of his Christian life. With him religion is not merely one co-ordinate principle amongst many which influence him, but the grand master-passion which transcends and dominates all others.

Mr. Cutts came to the South Elmsall Society some five or six years ago, and was quickly appointed to the Stewardship. From that date the development and prosperity of the society have been uninterrupted. A P.S.A. was at once started, Sunday-school work stimulated, open-air work was vigorously taken in hand and – best of all – conversions became a regular feature at the Sunday evening services. This happy phase – the conversion of sinners – has steadily continued from thatv time to the present. During the last six months more than a dozen sound conversions have been witnessed, all of grown-up people. As a result of these vigorous and sustained efforts, the membership and society income have more than doubled during the last five years, the present chapel being now far too small for the needs of this aggressive and growing church.

The personal gifts of Mr. Cutts, to which his success as an official worker of the church must in no small degree be attributed, are – power of initiation, organising skill, a kindly and winning disposition, and – not least – his eminent gifts of fluent speech and trenchant argument. He is still a comparatively young man.

William was born in 1875 at Monk Bretton, Yorkshire, to parents William Henry and Elizabeth Ann. William, senior, was a coal miner.

William followed his father into the coal-mines but by 1901 had established himself as assistant superintendent in life assurance. The 1911 census identifies that he had been promoted to insurance superintendent.

At the time of his Gerard’s marriage in 1931 William was a colliery contractor.

William died in the summer of 1955 in the Barnsley Registration District.