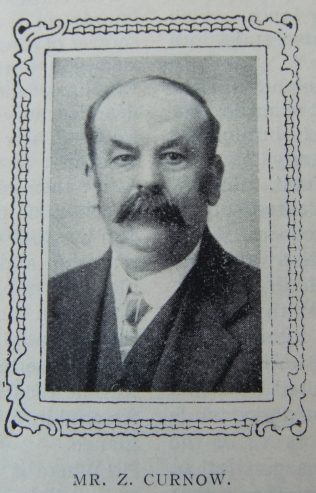 MR. Z. CURNOW, Senior Steward of Camborne Society, Redruth, is a Cornish Primitive Methodist of many years’ standing, whom to know is to esteem both for his own and his work’s sake. Born near Penzance, at fourteen he came to live at Tuckingmill in Redruth Circuit, attended our services there, and in 1874 was soundly converted and wholeheartedly dedicated his life to the service of Christ. For twelve years he earnestly worked for the success of our Tuckingmill Society, and in 1886 married, moved to Camborne, and joined our church there. After a short term as Assistant Steward he was called to the office of Senior Steward, the duties of which he has filled with credlt to himself and to the satisfaction of the church for the last seventeen years. He is deeply interested in every department of our church life and work, and though naturally unassuming and not eager for office, has by pressure of circumstances felt obliged to obey the unanimous call of the church to become Superintendent of the Sunday school, leader of Society Class, for some years Chapel Treasurer and Assistant Circuit Steward. Yet though responding to so many urgent calls he is rarely absent from the week evening services, and can be relied on to be always at his post to cheer the preachers by his presence, sympathy and support. Naturally the Circuit has recognised his worth, and has twice elected him Delegate to the District Meeting. His fellow-townsmen have also shown their esteem by electing him a member of the Camborne District Council and the Camborne Burial Board. Amiable, hospitable, courteous, loyal to his church, a brother beloved to the ministers and the loving friend and counsellor of all, we devoutly pray that he and his good wife may have many years before them of blessed service.

Zacharias was born in 1853 at Ludgvan, Cornwall, to parents Zacharias, a tin miner, and Mary Ann. He was baptised on 22 January 1854 at Ludgvan.

Note: The BMD Register identifies a marriage for Zacharias in early 1886 in the Redruth Registration District, but gives the possible brides as Mary Ellen Bennett or Elizabeth Mill. I have not been able to relate either of these names to Minnie.