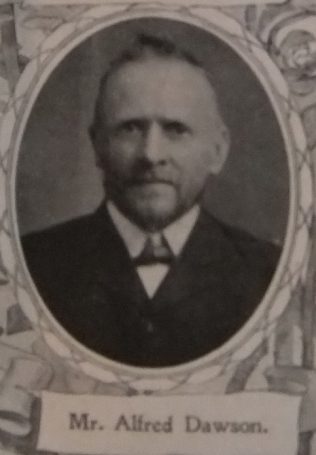 Mr. Alfred Dawson is the Circuit Steward of Bradford Sixth Circuit, and has held that office since its formation, except for one quarter. He became a member of Mr. Charles Weal’s class, in Manchester Road Society when fifteen, in 1865, and was drafted to Gate Street Mission as Secretary of the Room Committee and Sunday School in 1867; he received a “note” in 1868, and came on “full” plan in 1869; he was transferred to Rehoboth when the new chapel replaced Gale Street Mission in 1878, and has served in the offices of Class Leader, Trustees’ Treasurer, and Circuit Steward. He is a born financier, and the success of the Society in reducing its great debt to £1,100 is largely due to his ability in directing and working out along with ministers and other trustees, the many projects launched. We wish for him many more years of active and successful service for Rehoboth Church.

Alfred was born on 4 April 1850 at Bradford, Yorkshire to parents Benjamin and Edith. He was baptised on 30 March 1853 at St Peter, Bradford. Benjamin was a cotton warp dresser, although at the time of the 1861 census the family was in Huddersfield and Benjamin is described as a Primitive Methodist Local Preacher. He may have been working as a hired local preacher.

Alfred died in the spring of 1921 at Bradford.

Census returns identify that Alfred worked initially as a worsted weftman. By 1891 he had gone into business as a coffee tavern keeper. The 1911 census describes him as a restaurant keeper.