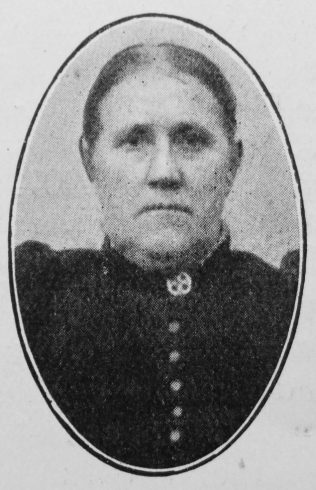 Transcription of obituary published in the Primitive Methodist Magazine by E. Quine

Castleton Society, in the Bradwell Circuit, has recently been deprived by death of one of its chief workers in the person of Mrs. Elizabeth Dakin. She had been connected with it all her lifetime. When a girl, she attended the Sunday School. Then she became a teacher. Forty years ago she joined our Church. During all that time, the little Church, next to her own family, has been her chief thought and care. For twenty-eight years she has been its society steward, and for many years its trust treasurer, which offices she held up to the day of her death.

For a long time she was its main support and stay. The little church became very feeble, the congregation more frequently under than over half a dozen. But for her the chapel would have been closed years ago. But she held on. She opened the door for the service. If the preacher came and there was no congregation, she went round and pressed the few to come. If the few came, and the preacher failed to come, she would give out a hymn, pray, and read a lesson, and in this way she managed to keep the chapel open.

For some time before she died she had the joy of seeing the little cause wonderfully improved. She was thoroughly loyal to her Church, and we doubt not was as loyal to her Christ.

Sister Dakin was not perfect. None of us are. But if her failings and her virtues are summed up, it will be found she has a large balance on the right side.

On the last day of 1907, at the age of seventy-two, she passed to her rest, after a long and arduous life.