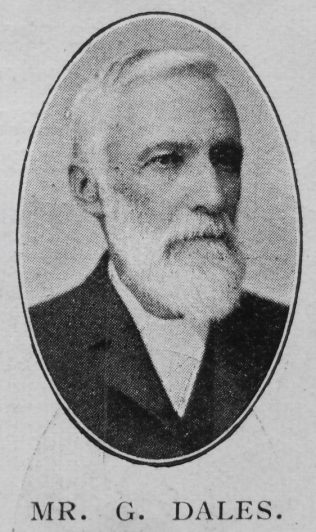 In the decease of Mr. George Dales the Louth Society has lost one of its oldest and most faithful officials. Converted at North Somercotes over 55 years ago, a few years later he came to Louth, and was quickly found a task as assistant class leader, and not until a short time before his death did he relinquish his task. Regular and punctual in attendance, sympathetic in nature, ready of speech, he could listen and reply to the varied experiences he heard recounted in the class meeting. During his later years he.spent his leisure visiting the aged and infirm.

He was deeply interested in all the life and work of the Church, and served for many years as sidesman. He was also a trustee and seat-letter.

He greatly  delighted in the means of grace, and was not often absent from the prayer meeting and week-evening preaching service. He found much joy in the practice of private prayer.

During the last few months of his life he was not able to leave his home, and in May last he quietly and peacefully sank to rest, having passed over seventy milestones on the journey of life, leaving a devoted wife, two sons, and a daughter to mourn his loss.

He will be greatly missed as a visitor of the sick. Having considerable leisure, he devoted it largely to this work, and by his kindliness, sympathy and tact, as well as his deep and genuine spirituality, was ever welcome in the homes of the suffering. A genial, tactful, friendly greeting will often render the  subsequent service one of sunshine and helpfulness. But he has gone to higher service.