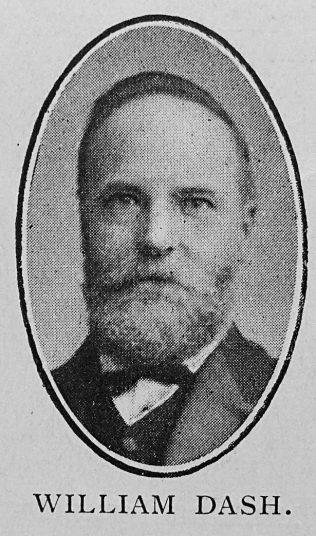 Transcription of obituary published in the Primitive Methodist Magazine by G.D.

Mr. William Dash, Cardiff passed away August 27th, 1911. He had been a Local Preacher for 45 years. Preaching the Gospel was the delight of his life. When converted, in young manhood, he was unable to read or write, but he soon learned to read, and, later, taking up the study of theological writings, studied them even in the midst of his daily work. The passion of his life was knowledge of God.

He coached quite a number of young men for the “plan,” and there are to-day men practically in every Methodist ministry who received their first impressions for study from him. It was the honour of his life to give a son to our ministry. An acceptable preacher, he has led many a one to the Master.  Everybody, who knew him loved him; a man full of the Christian graces.

Our departed friend missed his seventieth birthday and golden wedding day only by a week. The funeral service was conducted by the Revs. J.H. Bedford, W.C. Chrimes and Caleb Joshua (Baptist). |The interment was at Cardiff cemetery. Mr. Dash leaves a widow and family to bemoan the loss of their dearest earthly friend.

William was born  in September 1841 at Staplehill, Bristol, Gloucestershire, to parents George Dash, a beer seller (1851), and Ann Bryant.