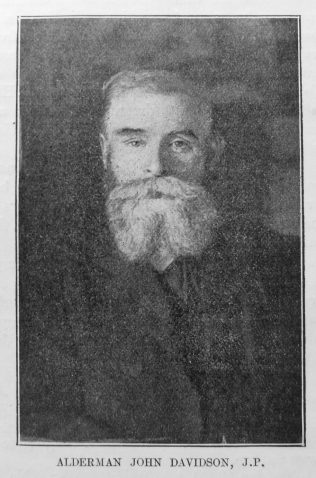 Transcription of Sketch in the Primitive Methodist Magazine by J.G. Bowran

We count it a privilege to pay tribute to the character and service of Alderman John Davidson. Well-known in the County of Northumberland, he is loved the most by those who know him best. Those who have seen him the nearest, the people in the Hexham district, and especially the people of Haydon Bridge, best know how great he is in all that makes a man. We have seldom seen so fine an instance of local fame.

Born on the fourteenth of December, 1837, at Garden House, on the Hunstanworth, Newbiggin and Bingfield Estates, of which his father was bailiff, almost the whole of his life has been spent in his native County. He had a great schoolmaster, Mr. Martin Bell, who discovered the gifts of his pupil and strenuously developed them. We can see that his earlier professional training was the necessary preparation for the distinguished position to which he came. Wide knowledge he obtained of the management of estates, first with his father, and then in Flintshire, Denbighshire, Cheshire, Derbyshire, Gloucestershire and several Scottish Counties. Then in 1875 he became the agent for the Greenwich Hospital Estates, the extensive lands belonging to the Lords Commissioners of the Admiralty, and Haydon Bridge became his home. Thousands of acres were under his surveillance. His long tenure of this high office, from which he has just retired, is in itself great praise. The present writer had the pleasure of reading last Christmas the cordial greeting of one of the Admiralty Chiefs to Alderman Davidson.

Our church in Haydon Bridge was in feeble state when Mr. Davidson came there to reside, but he was a Primitive Methodist and at once allied himself with his own people. A splendid open-air speaker, he was often to be heard in the village of his adoption. The story is told that once one of the Heads of the Admiralty was staying at the hotel close to the site of the open-air meetings. The villagers wondered if Mr. Davidson would appear. Of course, he was there. His magnificent voice was heard, and the people said one to another: “This is a religious man.” Once, having business in one of the hotels, Mr. Davidson was seen to enter by some of the boys about, and the news went round that a prayer-meetingwas to be held on the licensed premises. The boys knew that Mr. Davidson was a man of God.

It is impossible to tell all that he has done for the Hexham Circuit. For years he has been a local preacher, taking the farthest journeys and serving the smallest places. We have heard of him driving in the wildest weather, when the people never expected him to come. When surprise was expressed he would say with a smile: “If the doctors are able to go their rounds, why not the preachers?”

In the times of his strength he was in great demand for Camp-Meetings. His resonant voice, his homely illustrations, his vigorous appeals, made him a master in field preaching. He is a genius in pulpit speech. With an original mind, the art of surprising illustration, with humour, with satire, with strong convictions and vitality seemingly boundless, we are not surprised that everywhere he was eagerly heard.

A class leader, he sets the people a high example by constant attendance. Crowded as are his days, he finds the time for this means of grace. The same may be said of the regular services of the church. At the week-night preaching service he is always present, and, when unplanned, is to be seen in his place on each Lord’s Day.

As the Treasurer of the Trust at Haydon Bridge and as the Senior Steward of the Hexham Circuit, he has rendered service beyond all praise.

For years he has been in the service of the Community. A member of the Parish Council (of which he is chairman), the Rural District Council, the County Council, the Board of Guardians, he has given time and talent to the public interest. Quite recently, after twelve years’ membership of the County Council, he was elected an Alderman. He is also a County Magistrate.

One of the Founders of the Royal English Arboricultural Society, he furthered its interests as Secretary and Treasurer, and some years ago was the recipient of a handsome testimonial from his confréres.

It will be remembered that in 1897 he was the lay speaker at the Metropolitan Missionary Anniversary. But it is the manwho is lovable and influential. Simple and unaffected, he is trusted and admired by all. He is great by reason of his gentleness. He is a slave to duty, a lover of work. He has the genius for details. Trifles are perfection to him. His life is all of a piece. From his home to the office, from the Council Room to the class meeting, from the Bench to the pulpit, he moves, the same upright, earnest, frank, good man. He is doing more than he dreams. His life is a testimony to the greatness of the good. He has set the ideal for many.

Our friend has known grief. The death of his wife was a sore bereavement. A serious illness of some years ago has left his frame impaired, but these, through grace, have been transfigured, and brought into greater prominence his sympathy and hopefulness and courage.

His sons and daughters are treading in his ways. For him they have more than filial love. They have ‘‘the heritage of those that fear Thy Name.”

John was baptised on 24 December 1837 at Hunstanworth, Co. Durham. His parents were George and Sarah.

Whilst living at Haydon Bridge, census returns identify his occupation as land agent and farmer.