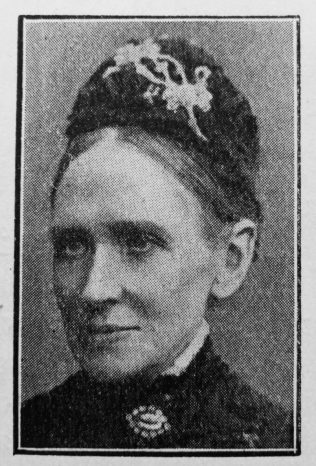 Transcription of Obituary in the Primitive Methodist Magazine by T.P.

Mrs. Mary Dennison, of Oakham, was blessed with godly parents. At sixteen she was converted and for forty-eight years witnessed a good confession. Married in 1863 she and her husband joined our little cause in Oakham, and rendered willing and faithful service for many years. Their home was ever open to the preachers, but the self-denial this involved was obviated in their later and more prosperous years. Their stalwart sons and daughters are among the best workers in our church to-day. On her husband’s death Mrs. Dennison was appointed Trust Treasurer, an office she retained till her death. For some years she was on the plan and rendered good service. Her Christian character was a tower of strength to our society; she was a true “Mother in Israel.”

Her one desire in her last illness was to see a revival of religion. She became a Passive Resister and suffered distraint several times. She literally fell asleep, April 9th, 1906. The Revs. W.S. Spencer and T. Parr, M.A., took part in the funeral service, the latter bearing eloquent  testimony to the high character and devoted service of our departed sister, and the precious heritage her memory would be to her children.

Mary was born in 1842 at South Witham, Lincolnshire, to parents Samuel, a carpenter, and Elizabeth.

She married Silas Brook Dennison (1839-1898) in the spring of 1863 in the Grantham Registration District, Lincolnshire. Silas was a rope and tent maker. This business was carried on by Mary after his death. Census returns identify eight children.