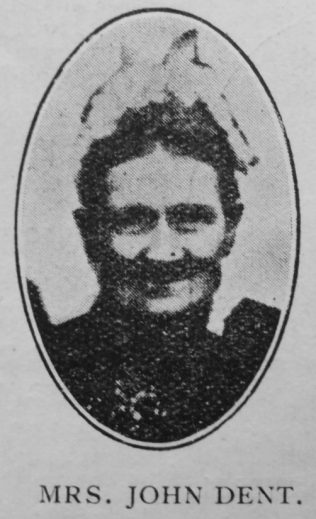 The Hexham Church has suffered a heavy loss in the sudden death of Mrs. Mary Jane Dent, the beloved wife of Mr. John Dent, of Saw Mill House. Born at Carlisle, on February 14th, 1842, she lost her father in a railway accident when she was but a child of two years. Her mother, Mary Oliver, removed to Henshaw, in the Haltwhistle Circuit, and here she was converted and became a member of the Primitive Methodist Church. For over twenty years the widow kept the chapel. The only payment she ever received was ten shillings a year towards the purchase of coals. It was for her a labour of love. Her house, too, was the home of the preachers for many long years.

The daughter was converted when sixteen years of age, and began the devout life which endeared her to all who knew her. In 1861 she married Mr. John Dent, a sturdy local preacher and a zealot for the cause. For three years they worshipped at the East Coanwood Society, and then for seven years at Langley. The remainder of her years were spent in Hexham Town.

Her husband has been in the employment of Messrs Wear and Company, the timber merchants, for seven-and-thirty years. Her son, Mr. John William Dent, is the cashier of the firm. There have been two sons and four daughters, all of whom, save one son, Joseph Oliver, still are happily spared.

Her love of her Church was evidenced in many ways. She was full of loyalty and zeal and sacrifice. None rejoiced more than she in the building of the new church. She and her family provided a stall at the Bazaar which raised nearly £80. They were generous donors to the Stone-Laying and Opening Services. Her home welcomed the preachers.

Her decease came very suddenly. She was laid to rest in the Hexham Cemetery on December 17th, 1909. The Revs. James Young, of Whitley Bay, and J.T. Ridley took part in the service and the writer gave an address of appreciation and sympathy. The family have been comforted in the grace of God and the prayers of countless friends.

Mary was born on 14 February 1842 at Carlisle, Cumberland, to parents John and Mary.

Before her marriage Mary worked as a domestic servant (1861).