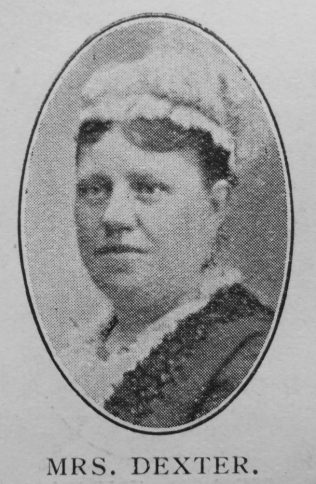 Mrs. Elizabeth Jane Dexter, widow of the late Ald. Dexter, of Jarrow-on-Tyne, was born at Gateshead in 1842. She was converted at seventeen years of age under Mr., now General Booth, and in 1876 Mr. and Mrs. Dexter were transferred to our Church in Jarrow.

A genuine Methodist, she loved the class meeting. Her house was ever open to the servants of God. While sincerely attached to our Church, our friend found good in all other Churches. In her the poor always had a friend. In the early years of the Women’s Temperance Association she was an earnest worker.

During her husband’s term of Mayoralty she supported him to the best of her ability, though she ever preferred a class meeting to a civic function. Her children understood her maternal love and earnest character, and they call her blessed. For many years before her death our friend was called to pass through great sorrow and pain, but faced her lot with quiet strength and showed the deepest gratitude to those who waited upon her.

On Nov. 12th, 1909, at Brighton, she gently fell asleep in Christ Jesus. The funeral service was conducted by Revs. J.G. Binney and G. Ramage.