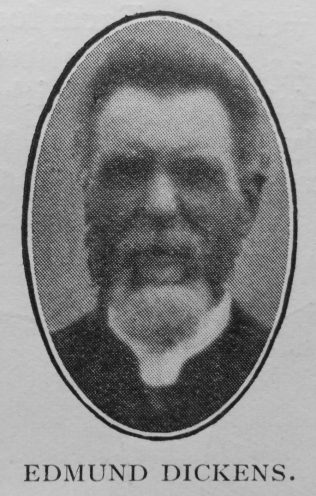 Mr. Edmund Dickens, though but sixty-eight years of age, was the oldest local preacher on the Stewkley Circuit plan. He was converted over fifty years ago, and maintained his membership with the Newton Longville Society for the whole of that time.

Being a man of more than average ability and with a mind stored with much reading, he was appointed to the senior class in the Sunday School, and no more fitting appointment was ever made. He afterwards served his Church in many capacities. As a local preacher he was much respected, for he gave of the very best. Though he never got far away from the Cross of Jesus, his sermons were out of the common, and his thoughts were clothed in most felicitous language.

In his earlier manhood he took great interest in the Agricultural Labourers’ Union, and to the end stood with unfaltering fidelity by the men of the soil.

His brief illness was one of much suffering, but was borne without a word of complaint. The writer will never forget his visits to the chamber where this good man lay. Said he, “Tell the people the Christ I preached sustained me now.” A large company gathered in the village Churchyard when all that was mortal of this true servant of God was laid to rest.