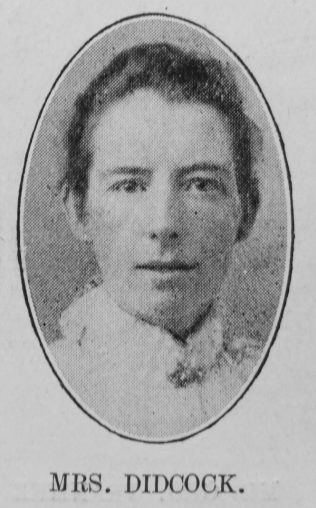 Transcription of Obituary published in the Primitive Methodist Magazine by J. Burkitt

It is with deep regret that we record the death of Isabel, the beloved wife of the Rev. H.R. Didcock, of Gainsboro’. Her associations with Primitive Methodism date back to her earliest days. Her father, Mr. J. Housby, is, and has been for many years, a prominent official and worker in our cause at Millom. When in her teens she removed to Blackburn, and while there fully surrendered her heart and life to Christ, this momentous step being taken in a Sunday evening service conducted by the Rev. T. Markwell. From Blackburn she removed to Altrincham, where she did splendid service for Christ and the Church in Sunday School, Christian Endeavour, and also in collecting funds for our church there.

Ten years were spent at Altrincham until her marriage transferred her to the sphere of a circuit minister’s wife. She shared the life and labours of her husband on the Wells, Batley, Frodsham and Gainsboro’ Circuits. In each place she made many friends, and was greatly esteemed for her kind and gracious behaviour. Beautiful tributes to her disposition and character have come to hand from the circuits mentioned.

Not until the new year had set in did it become known that she was in the grip of a fell disease. Everything possible was done to save her from its power but without avail. On Sunday evening, March 14th, she calmly surrendered life into the hands of Him who gave it, and passed from earth with an unfaltering faith in Christ as her Saviour and Lord.

The Rev. J. Burkitt conducted a memorial service in the Shakespeare Street Church on the following Sunday morning. She is at home with God, but here hearts are sore. We commend the bereaved husband and the three motherless children to our people’s prayers.

Isabel was born in 1868 at Millom, Cumberland, to parents John, an iron miner, and Harriet.

She married Henry Richard Didcock, a PM minister, in the summer of 1898 at Altrincham, Cheshire. Census returns identify three children.