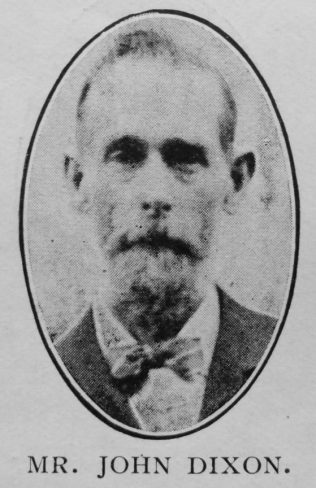 Transcription of obituary published in the Primitive Methodist Magazine by E.B.S

Mr. John Dixon, of Blackhill, who passed away February 22nd, hailed from Garrigill, in Weardale, and had many of the characteristics of the dale people: kindliness, strength of purpose, and deep interest in religion. He commenced work in the lead mines at nine years of age, receiving the munificent wage of 5d. a day. After a while he removed to Stanhope, and in our chapel there was converted at the age of 20. He at once joined our Church, and has been a consistent member ever since.

For the last 21 years he has been in the Shotley Bridge Circuit. He was an assistant Class leader, and also a Trustee. The services of the Sanctuary were his delight, and to watch his face as he drank in the message of God was an inspiration.

In the home he was dearly loved, and amongst the men who worked with him or under him won universal respect. His death brought a shoal of appreciative and sympathetic letters in which fine tributes are paid to his memory.

Prof. Ray wrote: “Never shall I forget that saint of God as he sat on the platform. It was like a great benediction to be near him.”

“He has lived a quiet, good and useful life, and left to his children the precious heritage of a good example,” wrote a London friend who knew him well. Just another:— “John Dixon was a God-fearing man, a loyal Primitive Methodist, a loving, tender-hearted husband and father, and a most faithful friend. Under the most trying circumstances he never lost heart, believing that all things work together for good to them that love God.”

He leaves a widow, a daughter, and three sons.

The funeral, conducted by Revs. E.B. Storr, J. Rutherford, and T. Elliott, testified to the wide esteem in which he was held.

John was born abt1857 at Garrigill, Cumberland.