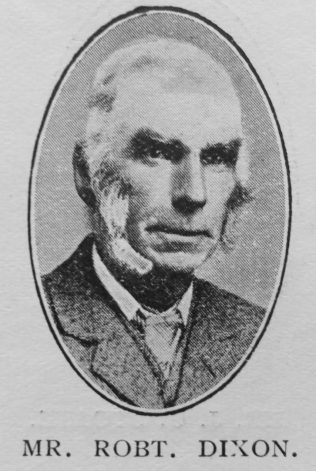 The Brandon and Methwold Circuit has recently sustained a very great loss in the death of Mr. Robert Dixon, of Foulden, Norfolk, who passed away March 4th, in his 82nd year. Mr. Dixon was a man of superior physical powers, fine qualities of mind and heart, and impressive force of character. The son of Primitive Methodist parents, he was brought up under pious example, yet did not give his heart fully to God until he was close upon thirty years of age. At once uniting with our church, he maintained an unbroken connection for more than half a century.

His religion was of a very bright and practical character. The Bible to him was a truly precious book, regularly read and studied. For quite fifty years he was a local preacher, and fulfilled his duties with much cheerfulness and diligence. Rarely absent from the means of grace he was a most sincere and devout worshipper. A generous giver to the funds of the church, he was also kind to the poor, and a welcome visitor in the homes of the sick and sorrowful.

For many years he was Society Steward, and his home was ever open to the preachers. He was also Sunday School Superintendent, Class Leader, and Chapel Treasurer for many years, and Senior Steward since Brandon and Methwold became a separate Station. Ministers who have travelled upon the station write of him with much grateful admiration, and the officials speak of him with deep Christian affection.

His last illness was comparatively brief, but of a very painful character. His remains were interred in his native village churchyard by our own minister in the presence of a large concourse of people. An impressive service was previously held in our chapel when the Rev. C. Shreeve gave an appropriate address.

His work on earth is done, but he has gone to higher service, and his work and his memory here will abide.