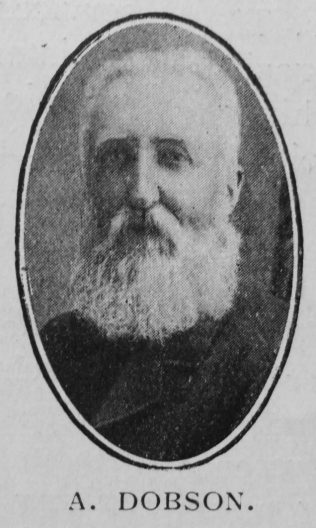 The Castleton Society and the Whitby Circuit have sustained a great loss by the sudden death of Mr. Alfred Dobson, one of the oldest and most respected officials. Returning with his wife from Westerdale to Castleton on the evening of September 27th, he sat down by the wayside to rest, and in a moment passed “to be with Jesus.”

Converted at Lealholm in his youth he bore a long and faithful witness for his Lord. For over 45 years he was a Local Preacher in the Whitby and Stokesley Circuits, and his faithful expositions of the Gospel were greatly appreciated by other churches as well as our own. The roughest storms never daunted him; he was always at his post and continued preaching to the last.

He also was a valued worker in every department of our Church life. The memory of his fragrant Christian character will long be sweet to those who knew him. Though on the funeral day the weather was very stormy, our Castleton Church was crowded with mourners, many coming a long distance to pay their last respects to his memory. The Rev. T.S. Berry, Wesleyan minister, and the Rev. J. Toyn took the service in our church, and the concluding part in Danby Churchyard was conducted by Rev. J. Toyn. In this churchyard also lie the remains of Mr. Dobson’s brother, a Primitive Methodist minister of great promise who died in early manhood.  The blow is very great, more particularly to Castleton, and the two sister churches of Danby and Houlsyke which lie so far from the Circuit town, yet are nobly upholding the standard of Primitive Methodism in this moorland district.

While we bow in submission to the Divine will, we pray that our Heavenly Father will comfort the widow and relatives.

Alfred was born abt1841 at Castleton, Yorkshire, to parents Thomas, who worked the land, and Hannah. He was baptised on 21 March 1841 at Danby, Yorkshire.