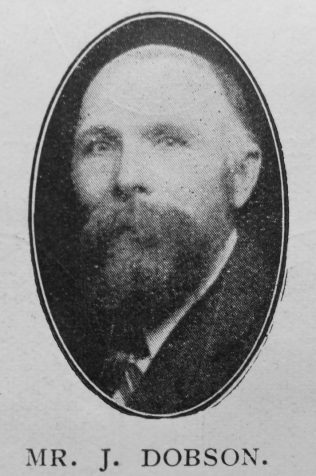 Transcription of obituary published in the Primitive Methodist Magazine by G.T.F.

Mr. Jethro Dobson was born at Hinton Waldrist, a small village amidst the hills of Berkshire, February 4th, 1854. His parents were Nonconformists of a sturdy, independent type, their home and family life being distinctly and healthily religious. As a lad, and largely through the influence of his elder brother, James, so well known throughout our Church as the Rev. James Dobson, he became converted and joined the Primitive Methodist Church at Longworth, in the Faringdon Circuit.

In course of time he was authorised to accompany his brother to his appointments, and in 1872 his name was placed upon the preachers’ plan. For 37 years he rendered earnest work as a local preacher, with much more than ordinary acceptance and success, in his home circuit, then at Sheffield, Eastwood, and Newstead, at which places he resided for a time, and for the past 28 years at Hucknall. His service was not confined to his own Church; being much in demand, and loving preaching he was often found occupying the pulpits of sister Churches. He preached his last sermon at Hucknall January 4th, 1908.

A few days after this service he was seized with serious illness from which he never recovered. After some months of suffering of exceptional severity he was able to get about again, but not for long. A second attack was too much for his weakened constitution, and he gradually sank to his rest, March 1st, 1909.

Jethro Dobson was one of God’s good men, one whose goodness no one doubted. He preached by life as well as lip, by his daily walk and conduct, at home and abroad, adorning the Gospel he proclaimed, bringing credit to the Church of his Saviour, whom he deeply loved and loyally served. May his dear ones be cheered and sustained, until for them, too, the day shall break and the shadows flee away.

Jethro was born on 4 February 1854 at Hinton Waldrist, Berkshire, to parents William Dobson, a shepherd, and Ann Chiswick.

He married Sarah Shepherd (1853-1927) in the summer of 1877 in the Basford Registration District, Nottinghamshire. Census returns identify two of four children.