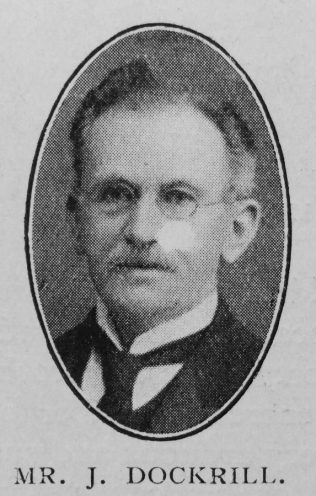 Transcription of obituary published in the Primitive Methodist Magazine by J. Ritson

For thirty years Mr. Joseph Dockrill was a leading official in the High Town Church and the Luton I. Circuit. Born sixty-eight years ago at Stanbridge, he was converted in our Dunstable chapel when eighteen years of age. Removing soon afterwards to the neighbourhood of Berkhamsted, he joined our Church in that town when our people worshipped in a room in Castle Street. He became a local preacher, class leader, society steward, Sunday School superintendent and then Circuit steward.

There a Baptist maiden became his wife, and has ever since been a loyal Primitive Methodist. He was associated intimately with Rev. Thomas Russell, and had much to do with the building of the first chapel in Berkhamsted. Removing to Luton some thirty years ago he at once threw himself into the work, and has since occupied all the offices named above. Every honour, including delegate to Conference, was his. He also served on the Board of Guardians and in connection with the Children’s Home.

Although he had been ailing for some months he was latterly able to attend the services, but his passing, July 18th, 1912, was sudden. Rev. W. Barnsley conducted the funeral service. The memorial service was conducted by Rev. J. Ritson, July 28th.

Joseph was born in 1844 at Stanbridge, Bedfordshire, to parents Thomas Dockrill, who worked the land, and Rebecca White.