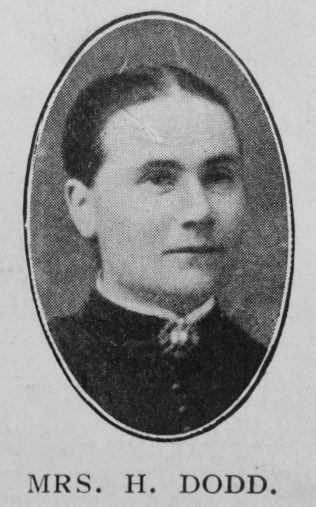 Transcription of obituary published in the Primitive Methodist Magazine by W.A. Nicholls

Our Church at Essington sustains a great loss in the passing of Mrs. Dodd. Born at Tenbury in the year 1864, with her dear husband, who is our church steward, class leader and local preacher, she has laboured in the following circuits: Hadnall, Wellington, Oakengates, Bloxwich, and Cannock.

From a child she loved God’s house and the means of grace; her home was always open to our ministers and lay preachers. The writer, with many more friends, visiting her previous to her decease, found her, although exceedingly feeble, peacefully reposing on the promises of the Lord.

On January 31st, 1912, her happy spirit passed into the presence of the King. She was laid to rest in Bushbury Churchyard, February 5th. A service was conducted in Essington Church by Revs. F.H. Brown and B.B. Farlow. On February 18th a memorial service was preached by Rev. B.B. Farlow, and much sympathy was shown towards her husband and family.

Hannah was born abt1862 at Bewdley, Worcestershire, to parents Joseph Bellamy, a railway plate layer, and Martha Evans.

Note: Online records identify that Hannah was born at Bewdley, not Tenbury, a couple of years earlier than stated in the obituary