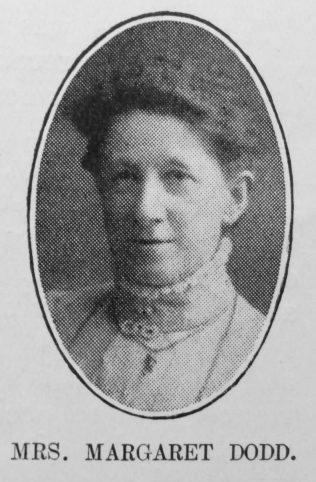 Transcription of Obituary published in the Primitive Methodist Magazine by J.G.B.

The Hexham Church and circuit have lost a generous helper and friend by the death of Mrs. Margaret Dodd, the wife of Councillor John Dodd, of Hexham. She was the youngest daughter of Mr. and Mrs. Joseph Green, of Corbridge. In her early years she attended the services of the Established Church, her father for many years being churchwarden. Some can recall the day when she was married to Mr. Dodd in the Hebbron Memorial Chapel, Hexham. She at once espoused the church of her husband and furthered his efforts on its behalf in all directions. In the numerous bazaars she took a prominent part.

The other places in the circuit also enjoyed her interest and were enriched by her bounties. Hers was an open house for the ministers. At the last bazaar she and her daughter provided a stall, and at the Stone-Laying ceremony on Whit- Monday she was in high heart as her husband laid one of the stones. She was eagerly anticipating the opening of the new church next Whitsuntide, but God had other and better thoughts. For some years her health had failed. We now know that she must have secreted her pains to save her husband and family distress. She had gone for rest and change to Silloth. Here her illness took an acute form. Breaking her journey homewards at Haltwhistle, at the home of Mr. and Mrs. J. T. Watson, the end came speedily. On Sunday, June 28th, 1908, she went home to God.

There was a large gathering of ministers and friends at the interment, some of the ministers coming long distances to express their sorrow and sympathy. The Revs. J.T. Ridley and J. Tweddle read the appointed Scriptures. The Rev. W.A. French offered prayer and the Rev. M. Johnson delivered a sympathetic and appreciative address. The Rev. J.G. Bowran read the committal service and the Rev. C. Pettler prayed at the graveside. Many of our people were present from all the places in the circuit. She leaves a daughter and two sons, by whom her memory is cherished. For her husband and family the utmost sympathy is felt.

She married John Dodd (abt1851-1920), a butcher, in early 1874 in the Hexham Registration District, Northumberland. Census returns identify three children.