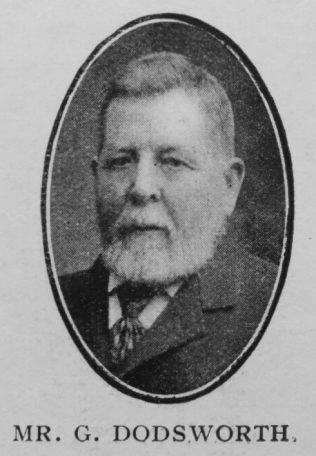 Mr. Gregory Dodsworth was born April 22nd, 1844, at Willerby, Yorks, the residential locality of the Dodsworth family for over two centuries. Nephew of the late Rev. Jeremiah Dodsworth, and grandson of one whose home was open to all agents of Primitive Methodism, he became familiar with some of the earlier ministers. One of the most precious memories of the family is that the late venerable Wm. Clowes preached his last sermon in the grandfather’s house.

In 1869 Mr. Dodsworth married Miss Dunham of Brigg, which union proved fruitful of four sons and four daughters, most of whom are members of Christ’s Church.

Mr. Dodsworth was a trustee of Great Thornton Street Church, Hull, which he served as Treasurer for many years. He was likewise a Class Leader, and in his earlier days a Sunday School Teacher.

The personality of Mr. Dodsworth was distinctive; his mind was alert, clear, his heart was affectionate and tender, his soul sympathetic. The passion of his soul was to save men and see the  salvation of God go forth as brightness. He won and retained the unqualified confidence and growing regard of his employers. In his Church relations he endeared himself to his co-officers. His home was always open to special preachers for Gt. Thornton Street Church.

Mr. Dodsworth bore his final affliction with fine Christian fortitude, till on Sunday, June 18th, 1911, he “crossed the bar.” The funeral service on June 21st was conducted by the Pastor. His precious casket was deposited in the “Primitive” corner of the General Cemetery, Hull. An “In Memoriam” was held in Great Thornton Street Church.

Gregory was born on 22 April 1844 at Willerby, Yorkshire, to parents William Dodsworth, who worked the land, and Mary Taffender. He was baptised on 8 May 1844 at Hull.