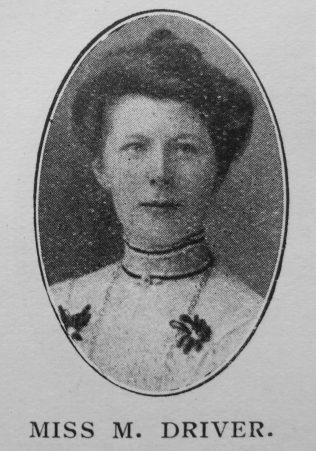 In Maria Driver, daughter of Mr. and Mrs. Samuel Driver, there has passed away a bright spirit, whose beautiful character leaves an abiding impression. Born May 9th, 1877, she died April 13th, 1911. For eighteen months she had suffered and borne her pain nobly. As the end drew near, her prayer was that she might be at home with God on Easter Sunday. Before Good Friday dawned, God gave the call, and she ascended to be with her Risen Lord.

An ardent Christian Endeavourer, since the Society was formed in 1896, she never missed the Thursday meeting if the opportunity to be present was hers. She regularly made the C.E. Plan, and made it her task to welcome strangers at the Sunday services. A more suitable person for such work could not have been found.

Held in the highest esteem by all ministers who have travelled the Silsden Circuit in recent years, they have, since her death, borne testimony to her worth. The funeral took place on Easter Sunday, April 16th. The service was held in the Primitive Methodist Chapel, Silsden. The place of interment was the Silsden Cemetery. Rev. J. Walton and Mr. Tom Fletcher officiated.