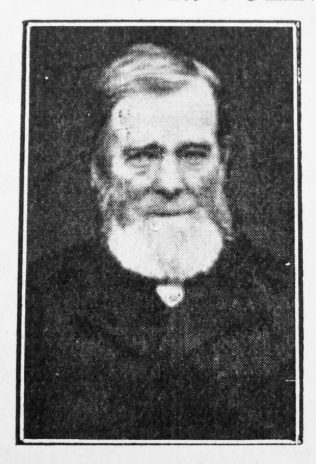 Transcription of Obituary in the Primitive Methodist Magazine by William A. Eyre

One of the grand old men of Primitive Methodism, John Drought, of Rainford, St. Helens, was born September 10th, 1819, and departed this life October 20th, 1906. He joined our Church sixty-four years ago, and commenced preaching about the same time. He was a pioneer evangelist and had a good deal to do with establishing our Church at Southport, now Church Road. He and three other local preachers from Banks, with their wives, sailed across in a fishing boat to Fleetwood, singing as they approached the shore, “All hail the power of Jesus’ name.” They met with opposition from the vicar and Romish priest, but there soon followed their labours a rich harvest.

Fifty-three years ago he care to St. Helens, and continued his evangelistic efforts. His preaching was based on strong conviction: he had no questioning as to the Divinity and saving power of Jesus Christ. His sermons as a rule were carefully prepared, and in early life he would spend four hours a day in reading and study. He was loyal to Christ and the Church. At all costs he would do his duty, and rather than be absent from his place as class leader, he would pay a man to attend to his work. He was fearless in rebuking evil, and being of small stature often ran great risks from rough, powerful men. Of the heroic type, he shrank from neither danger nor hardship. He would be astir at two o’clock on Sunday mornings, and after attending to the cattle would start at four for his appointments, involving a walk of perhaps forty miles. “You are rather late,” said a leisurely official to the preacher who had walked seven hoursto reach his appointment. “Yes,” said the tired preacher drily, “and you would have been late if you had walked as far as I have.”

His uprightness and integrity won the respect of all who knew him; all believed in his genuineness. The crowded congregation at the funeral service, which was conducted by the writer, was representative of every church in the circuit, with many outside the Connexion who had come to show their regard for one who from youth to hoary age had been a faithful steward of Jesus Christ.

John was baptised on 10 October 1819 at St Nicholas, Brighton, Sussex. His parents were John, a saddler, and Sarah.