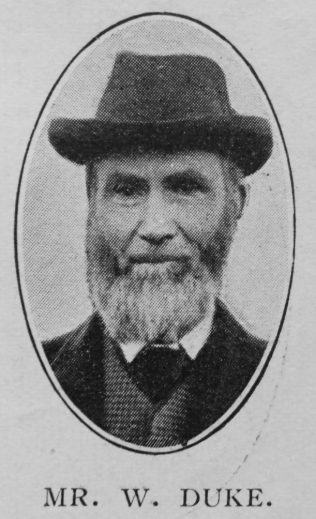 On May 12th, 1910, our beloved brother and friend, Mr. William Duke, of Hutton-Cranswick, passed within the veil. He was born at Seaton, in the Hornsea Circuit, January 11th, 1843. His parents were members of our society in the village. He was converted when about 17 years of age, under the ministry of Rev. T. Whittaker, from whom he received a plan on July 4th, 1862, authorising him to accompany a local preacher to his appointments. He quickly proved himself to be an acceptable local preacher.

He came to the Driffield Circuit in 1865, and through all the subsequent years has rendered valuable service to the cause of God as local preacher, class leader, and circuit official. Had he kept a record of the miles he walked, the sermons he preached, and the souls won it would be worth publishing.

Rev. J. Shaw says, “The Church at Cranswick and the Driffield Circuit have lost a useful member, a wise and able official, and one of the best of local preachers.”

He was seen at his best in the class meeting, where his rare advice and spiritual experience proved most helpful to the members. He was sent as Delegate to District Meeting a number of times, and on three occasions represented the District in the Conference. He took an active part in local affairs, and held nearly every public office in the village.

The funeral was on Monday afternoon, and the first part of the service was conducted in our chapel, and the second part in the churchyard, by the Rev. J. Teece, assisted by Revs. W.A. Hammond (representing the District), J. Scruton, P.W. James, and J.N. Clague. The Vicar was present at the grave, and pronounced the Benediction. Crowds of people from the village and the surrounding district were present to show. their respect for a man of sterling worth.

“The memory of the Just is blessed.”

May we all prove worthy of so priceless a heritage.

He married Martha Broadley (1842-1924) in the spring of 1868 in the Beverley Registration District, Yorkshire. Census returns identify seven children.

George died on 12 May 1910 at Hutton Cranswick, Yorkshire.