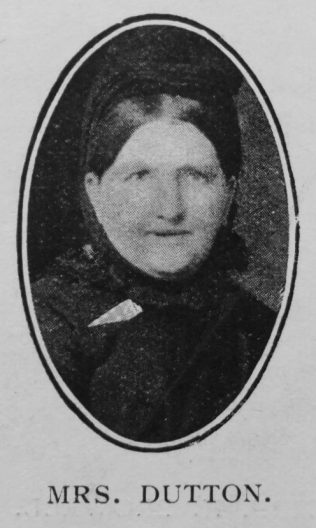 Transcription of obituary published in the Primitive Methodist Magazine by E. Parsons

Tipton Circuit has lost one of its oldest members in the death of Mrs. Dutton, wife of our respected Circuit Steward, on Dec. 15th, 1911, in her seventy-fifth year. She joined the Sunday School at Princes End when she was between four and five years of age, and joined the Church between thirteen and fourteen years of age, thus for sixty years she was a member of our Church. She worked and prayed for its welfare. She was most regular in her attendance at the means of grace, for she found in God’s house the fulfilment of His promise, but to see her in truest character was to meet her at home, and see the Christian spirit there displayed. She had been the faithful wife of him who now mourns her loss for many long years. No more faithful and dutiful wife has ever been given to a husband, for she was one with him in all endeavours of life. She shared his joys and was one with him in his sorrows. She has left to her children a noble example of a true woman and a faithful follower of Jesus Christ. She was highly respected in the whole neighbourhood where she had spent the whole of her life.

This was seen on the day of her funeral, when a large number of people attended that service in respect to her sacred memory. At the memorial service a large congregation assembled and a most impressive service was conducted by the writer. We convey our deepest sympathy to Mr. Dutton and his family in their loss, and pray that they may be supported with God’s presence, and when their race is run they may meet their loved one in the Father’s house on high.

“O God, our help in ages past,
Our hope for years to come;
Be Thou our Guard while life shall last,
And our perpetual home.”

Ann was born in 1837 at Tipton, Staffordshire, to parents Thomas Higgins, a labourer, and Hannah Dudley. She was baptised on 23 April 1837 at St Martin, Tipton.

She married William Henry Dutton (b1835), a confectioner (1871), on 2 September 1860 at Sedgeley, Staffordshire. Census returns identify three of six children.