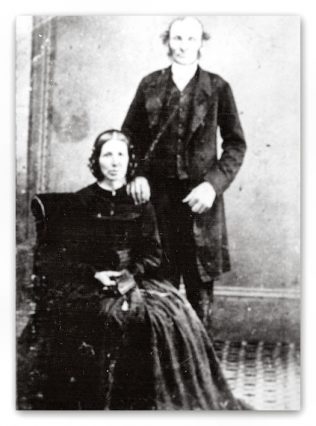 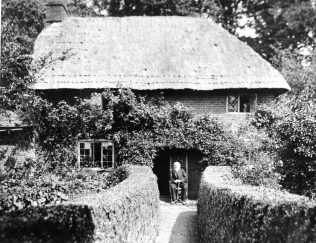 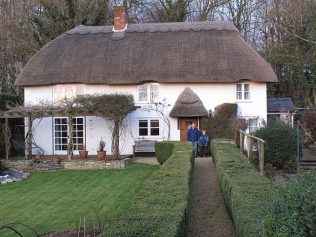 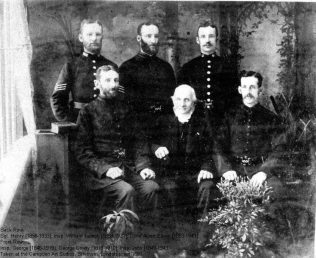 zoom
George with five of his sons who joined the MET, c1891 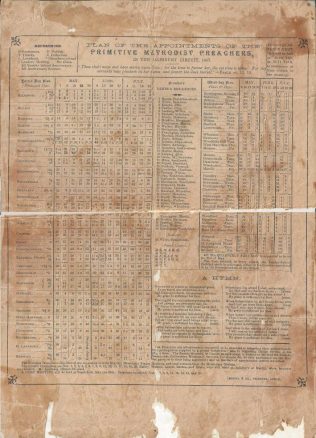 zoom
George Dowty's copy of the Salisbury circuit plan, 1847. You can see that he has riniged his appointments. 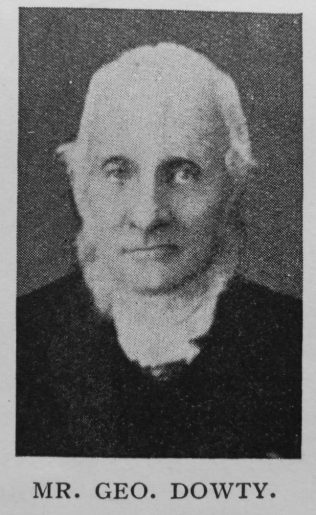 My great grandfather  was a local preacher from about 1842 for most of his long life and a founder member of a Chapel in Waddon, Alderbury, Wiltshire. By trade he was a boot and shoe maker, a trade he learnt from his father and also practised all his life, although I think in later years manufactured shoes took over and most of his work became repairs.

He was also a regular visitor to the Metropolitan Police Christian Society in London. Six of his sons joined the ‘Met’ during the late 19th century, among many country boys who joined as the police force grew to meet the increasing population’s needs. The impact his life and faith had on his family and the wider community in Salisbury and London is evident from the remarkable tributes that were paid to him on his death.

Extracts from The Salisbury Times and South Wilts Gazette, The Alderbury Parish Magazine, and The Aldersgate Primitive Methodist Magazine, are given below.

The Village of Alderbury has lost its oldest inhabitant, and the whole of the district one of its interesting characters, in the death of Mr George Dowty, which occurred on January 21st, after an illness lasting ten years, over seven of them being spent in bed. In spite of a laborious life, very strenuous in its early stages, when the “blessings” of Protection were in full swing (bread 1s 10d per gallon, tea 6d per oz., sugar 9d per lb, for example),
Mr Dowty brought up a family of eleven children, and lived to pass his 91st birthday in November last.

All his family are still living, the best known locally being Mr Thomas Dowty, of Whaddon, who has filled the office of Guardian and District Councillor, is a prominent Friendly Society man, and so forth.

Six of his sons served their time in the Metropolitan Police Force, wherein four showed their worth by rising to the rank of inspector, and one to that of sergeant, while one had to retire after being injured in an encounter with a burglar, and is now engaged by the National Society for the Prevention of Cruelty to Animals.

One of his daughters, the wife of Mr George Shelley, Tonyrefail, Glamorganshire, who upon settling down in the rising Welsh Village, soon interested herself in Christian work and was one of the founders of the Bible Christian Cause, and is at present deservedly popular amongst all classes, and a strenuous worker in the United Methodist Church where Mr Dowty often preached with great acceptance.

Through his long life Mr Dowty took the deepest interest in everything that concerned the welfare of the parish, and his earnestness gained him the respect and esteem of all. He was an ardent Primitive Methodist, and not only the oldest member of the Whaddon Church, but has acted as its society steward from its very commencement. For many years he served his circuit as a local preacher, and travelled thousands of miles to preach the gospel. There is hardly a chapel for miles round Salisbury in which he has not officiated.

Some years ago when a series of interesting articles on “Local Preachers and their Work” appeared in the columns of this paper, Mr Dowty put on record a most interesting account of his labours in this capacity, from which we record the following extracts :-

“Having read with much pleasure the history of Brother Thomas Fry, of Wilton, and seeing that you invited other old village Local Preachers to give you a history of their labours, I thought that I would just give you a brief outline of some of my work as a Primitive Methodist Layman. Brother Fry and I were born in the same village, and as boys played together. It was in his home that I was taught the plan of salvation. This took place on July 2nd, 1842.

I was at once put to work in the church to teach the children their ABC, put the people in their seats, snuff the candles, for we had no lamps in those days, and the candles needed snuffing three or four times during the service, especially when the chapel was full, which was the case 56 years ago.

At the end of one year I was sent to take a Local Preacher’s appointment at Charlton, and the next Sunday was invited to Newton, near Romsey. From that time until last year I laboured in the church, walking long journeys. I have walked 17 miles to an appointment on a Sunday morning, and hundreds of times have covered 10, 12, or 14 miles on a Sunday morning, taking three services and walking home again.

I have visited, and preached, in every place in the district of Salisbury, I have spoken on the road side, in the village street, and village green, in the New Forest among the heath and furze, in barns, cart houses, cottages, chapels, mission halls, and in a lady’s drawing room.

I have preached in five districts, and six counties for Primitives, Wesleyans, Baptists, Free Methodists, Life Boat Mission and the Christian Police Association in London, and among the London Chapels.

I have visited London thirty times for Sunday School Anniversaries. I have gone to West Wilts, and South Wales, and preached, spoken at tea meetings, and given temperance addresses. Twice I have been sent by the Salisbury Circuit to the district meeting in Oxford and Swindon, and once attended the annual conference at Leeds.

For forty years I have been a total abstainer, during which time I have done all in my power, both by voice and example to advance the Temperance cause, I think I may say with Paul, “In Journeys oft, and labours more abundant”, but now it is the end of the day, it seems that the day’s work is over. I am waiting on the borderland for the orders to pass over to the other side of the river, then “I shall march up the golden street, And ground my arms at Jesu’s feet.”

The funeral took place at Alderbury Churchyard on January 25th, 1910, and was attended by upwards of 200 people. A brief service in the house was conducted by the Rev W T Healey (circuit minister). Prayer was offered by the Rev T C Rigg, of Romsey. At the graveside a brief and touching tribute was paid to the departed by the Rev J H Green, of Salisbury, who had known Mr Dowty for upwards of 40 years. After singing “Jesu, Lover of my soul,” the Rev J K Ellwood, of London, offered prayer.

A memorial service was held on Sunday week, at Whaddon Primitive Methodist Chapel, and conducted by Mr Frank Harrison, of Woodfalls, who spoke as the oldest living friend of Mr Dowty.

His first recollection of him was about the years 1843-4, soon after he moved from Alderbury, where he was born, to Dowton, and started business as a boot and shoe maker. He married at Dowton, and of his wife the preacher spoke with great regard. She enjoyed 46 years of married life, and died in 1891.

In 1846-7, at the time of the cholera outbreak, Mr Dowty was living at Woodfalls, and after six or seven years went back to Alderbury into the house were he died, and where he was born and his father lived for a long period. It was this house which he opened for the purpose of holding religious meetings long before the chapel was erected at Whaddon.

A servant of Jehovah

Refering to his old friend’s character, he likened him to Joshua, viz: “A servant of Jehovah.” His friend had a faithful past, a distinct call, a sense of the presence of God, and an indwelling of the word of God. Sweet peace and contentment marked his closing years. He had a beautiful outlook and uplook, and always seemed familiar with the homeland, and apt in his illusions to it.

He gave a full and abundant life service to his Lord and his church, although it cost him much in self sacrifice. He especially magnified His Lord in his preaching, made much of Jesus, and grew eloquent on this theme. He was sound in the faith, and new theologies did not disturb him. Repentance, faith in Christ for salvation, free, full, and present, was his creed. He showed a spendid loyalty to his church. He loved Primitive Methodism, without bigotry towards others. He was converted at the age of 24, and at once gave evidence of the new life within, first by his willingness to be of some serice to the society with which he ws united, and second, by his early call to special and public work.

The following kindly reference appeared in the February number of the Alderbury Parish Magazine:

Oldest man in the parish

On Friday, January 21st, there passed away from our midst Mr G Dowty, the oldest man in the Parish, who last November attained his 91st birthday. During his long life he had seen many changes. A native of Alderbury, he lived for some time at Woodfalls, but eventually returning to Alderbury, he finally settled down in the house in which he died, which he occupied for the last 56 years. There he brought up his large family of 11 children, all whom were able to meet together to render him the last honours possible.

Though many have differed with him in opinion on religious or other subjects during his lifetime, there are few men who have been more generally respected. He was so thoroughly in earnest, so genuine, and so deeply religious; and the fact that most of his sons have occupied, or are still holding positions of importance and responsibility, and yet never lost touch with their father and old home, speaks volumes for his training and influence over his children, an influence, too, which was largely felt by those who were connected with him when he was a preacher.

For some years now his work has been over, and he had been bedridden, but always patient, cheerful, and contented. Of him Keble’s lines are very true:

“Such calm old age as conscience pure,
And self-commanding hearts ensure;
Waiting their summons to the sky,
Content to live, but not afraid to die.”

For some few weeks he had been failing fast, and at last the end came quietly and peacefully, and he “fell asleep to wake again in heaven.”

The following is an extract from the above of January, 1910.

The “grand old man” of the Woodfalls Circuit entered the eternal home on January 21st, at the age of 91. First Society Steward of Whaddon Society, he held the post till his death. Brother Dowty was a remarkable man. Devoted to every good cause, when village privileges and liberities were less than they are to-day he was a leader and spokesman for the people.

His greatest work, however, was done in the Church. A local preacher above the average, he filled at different times nearly every pulpit for miles around. He had the joy of being in many fine revivals.

For the last seven years he was bed-ridden. But those years were wonderfully blessed. To the last he was interested in his circuit, the denominations, and the country.

The funeral service was conducted by the Rev W T Healey. A touching tribute was paid at the graveside by the Rev J H Green. The Revs J K Ellwood, of London, and T C Rigg, of Romsey also took part.

Friends came from all parts to pay their respects. Possibly one of the strongest proofs of the place he held in the affections of the people was the fine eulogy which appeared in the Alderbury Parish Magazine.